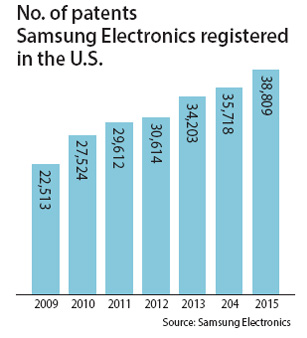 Samsung Electronics registered 5,072 new patents in the United States last year, maintaining its position as the second-largest holder of patents in the world’s largest economy after IBM since 2006, according to the Korean tech giant on Thursday.

The company has been stepping up efforts to protect its intellectual property rights by consistently raising its number of patents registered around the world, which has become even more important as global tech players scramble to launch patent battles amid fierce competition.

Most of the Samsung’s patents are related to smartphones, smart TVs, memory chips and system large-scale integration, which are being used or will be used for Samsung’s key businesses. Design has also become a crucial element of patents.

Last year, Samsung spent 14.8 trillion won ($12.5 billion) on research and development to register 6,625 patents in Korea and 16,770 patents overseas. Patents newly listed in the United States accounted for 30 percent of the entire pie.

“We hold the largest number of patents in the U.S. to cope more effectively with potential legal disputes there,” said a Samsung spokesman.

Amid growing importance of the United States, the number of Samsung patents newly listed there surpassed the number of those in Korea for the first time in 2014, four years after the legal dispute between Samsung and Apple began. In 2014, U.S.-registered patents totaled 32,507, 3,211 more than at home. The gap between the two countries soared to 8,068 in 2015.

Meanwhile, Huawei topped the list of international patent filers for the second straight year last year, according to the World Intellectual Property Organization in March. The world’s third-largest smartphone producer after Samsung and Apple applied for 3,898 patents in 2015, 456 more than the previous year and more than Qualcomm, Samsung, Sony, and HP.