Vietnam is being favored over China as the new home for global companies’ manufacturing facilities, thanks to recent trade agreements and a cheaper labor force, according to the Korea Trade-Investment Promotion Agency (Kotra) on Thursday.

The agency looked into 31 of the latest cases of manufacturing plant construction or transfer plans reported to its trade centers. Of the six most probable production base countries - China, Vietnam, Indonesia, Thailand, Malaysia and Mexico - it found that most companies have either entered or plan to enter Vietnam.

Among 31 plans proposed by 27 companies, with some having more than one plan to transfer manufacturing facilities, 15 were heading for Vietnam followed by three companies eyeing Mexico and China.

Kotra also considered the original home site of factories being transferred and found that while only one Vietnam-based company is preparing to leave, 11 plants had already transferred or were preparing to transfer from China with four heading for Vietnam. 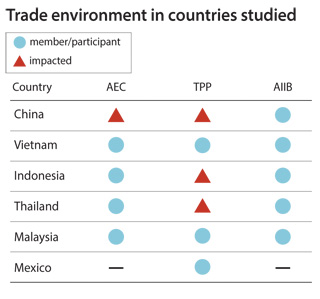 Vietnam has become the favored destination for global companies including Samsung Electronics, Hyosung and Japanese Toyota as it most recently signed the Trans-Pacific Partnership (TPP), which will reduce 18,000 tariffs and provide a cheap labor force.

The TPP is currently signed by 12 countries including the United States, Japan, Canada, Mexico and Vietnam and is expected to cut or reduce tariffs on most traded products immediately after the agreement is in effect. The agreement also solves issues regarding investment regulations, intellectual property, labor and environment.

Vietnam is also part of the Asean (Association of Southeast Asian Nations) Economic Community and Asia Infrastructure Investment Bank (AIIB). The impact of Asean Economic Community may not be as strong as the TPP as there is lower recognition of the agreement in the country, Kotra said, however being a member of AIIB is expected to help Vietnam with funding for basic business infrastructure construction.

As for labor costs, the average worker at a manufacturing plant in Vietnam earns 68 million Dong ($3,039) annually, based on 2014 data by the Vietnam Chamber of Commerce and Industry, which is roughly a month’s pay for a worker in Korea. It is about half the cost in China, according to a business operator in Vietnam.

Samsung Electronics plans to move its mobile phone manufacturing from China to Vietnam as labor costs in the mainland are rapidly rising and exchange rate issues with the Chinese currency can be avoided.

Hyosung, a manufacturer for spandex and tire cords, also plans to expand its investment in the manufacturing plant which has been operating in Vietnam since 2008.

Its business expansion in Vietnam is mainly to take advantage of the trade benefits of TPP.

“Labor-intensive industries such as textile and apparel companies tend to favor Vietnam over China as the mainland no more offers a cheap workforce,” said Jang Soo-young, an analyst at Kotra.