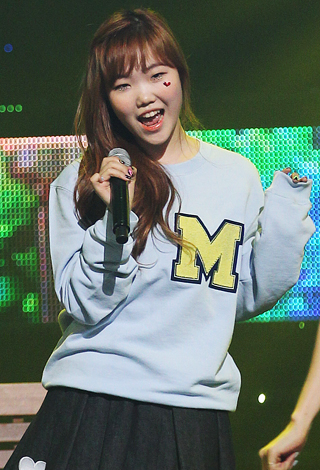 Lee Soo-hyun of K-pop duo Akdong Musician has said that because she doesn’t want to get plastic surgery, she wants to improve her looks through dieting.

Lee and brother Chan-hyuk appeared on the live radio show “Choi Hwa-jeong’s Power Time” on Friday and talked about the production of their recent album “Spring Vol. 1,” which came out earlier this month.

The show’s host, Choi Hwa-jeong, fielded questions from listeners during the show, and one commented that “Soo-hyun looks so thin — you should stop losing weight.”

In response, Soo-hyun said, “I decided not to have a plastic surgery, so the only way I can look better is by going on a diet and shedding some weight,” the 17-year-old singer said.

“I still want to lose more weight, though,” she added.

Soo-hyun and her brother Chan-hyuk began their professional singing career in 2014 by releasing the first regular album “Play,” but the brother-sister duo really made a name for themselves by appearing in the second season of the TV audition show “Superstar K” (2012-13). The duo writes and composes their own music.

They won the second season and signed a contract with YG Entertainment, which manages big-name K-pop stars such as Psy and Big Bang.