Stars travel with their fathers in new show

Stars travel with their fathers in new show 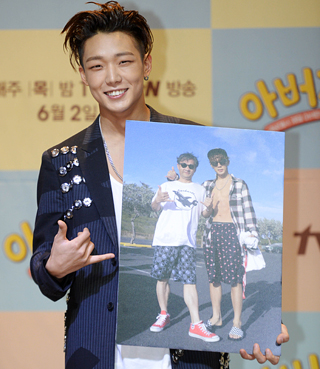 Heartthrob singers who rarely appear on reality TV shows, such as Roy Kim and Bobby, a member of the K-pop boy group iKon (pictured), will appear in the upcoming reality TV show “My Father and Me.”

The TV show hopes to improve the awkward relationship between fathers and sons who rarely talk to each other. As part of the program, seven celebrities and their fathers will be sent on a backpacking trip.

Along with Kim and Bobby, the show has cast celebrities of various ages, from comedian Nam Hee-suk and martial arts expert Choo Sung-hoon, both in their 40s, to Kim Jung-hun, a singer-turned-actor in his 30s, to younger stars like singer Eric Nam and actor Yoon Park.

Some of the show’s cast members had a question-and-answer session with local media outlets at the Glad Hotel in Yeouido, western Seoul, on Friday.

Nam, Choo and Park were absent because they were filming other projects.

“We’ve never been anywhere with just the two of us,” Kim said. “It was my first trip with my father. We drank beer together and watched the sunset on the Mekong River. We also took our very first selfie during this trip.

“I always thought of my father as a quiet person, but after this trip, I learned that he’s actually hilarious,” he added.

“My father and I went to Hawaii, and we talked a lot,” Bobby said. “Some of the stories I heard from my dad were hilarious, and others were so shocking that I want to keep them secret between the two of us.”

When asked what he thought about taking a trip with Yang Hyun-suk, the head of YG Entertainment, which manages his group iKon, Bobby said, “That’s too horrific [to think about],” and laughed.

“I wanted to know why fathers and sons are awkward when they are together,” Park Hee-yeon, the show’s producer, said. “That question was the beginning of this show.”