Yeouido apartments to be redeveloped at last

Yeouido apartments to be redeveloped at last 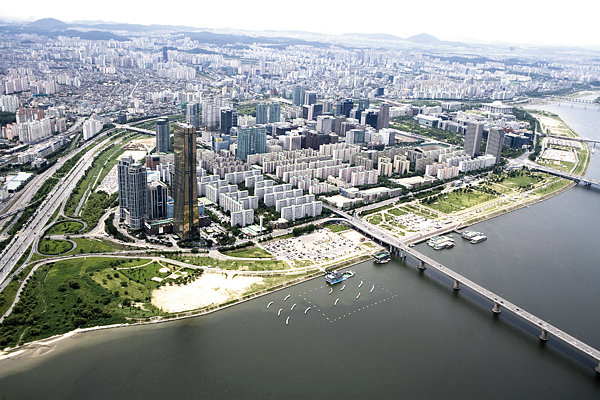 An aerial view of Yeouido, Yeongdeungpo District, in western Seoul, where reconstruction projects are underway. Most of the apartment complexes in Korea’s financial hub are more than 30 years old. [JOONGANG ILBO]

In the mid- and late-1970s, Yeouido in Yeongdeungpo District, western Seoul, was the hot residential neighborhood for the young and newly rich. It started losing its cachet as the three districts generally referred to as Gangnam - Seocho District, Gangnam District and Songpa District - rose as the new go-to area for the nouveau riche in the 1980s and through the 1990s.

Although redevelopment and reconstruction has been heavy throughout the country and particularly in the Gangnam area, most of the apartments in Yeouido have remained unchanged for more than a decade. Apartments in Yeouido have high floor-to-area ratios of 200 to 250 percent. A redevelopment or reconstruction project is more profitable if the existing apartment has a lower floor-to-area ratio, as it would give more room to build additional floors, which translates into more apartment units to sell.

“For the current apartment owners [in Yeouido], reconstruction would be meaningless as an investment because the profits that would be generated would be small,” said a realtor in Yeouido.

Another problem for Yeouido is that after Park Won-soon became mayor, the Seoul government raised the contributions required to be given to the local government when an apartment is redeveloped. Those contributions are of public space on which to build playgrounds and roads.

In 2009, the previous Seoul mayor, Oh Se-hoon, laid out a plan called the Han River Renaissance Project that was going to spiff up five areas along the capital’s main river: Apgujeong, Yeouido, Ichon, Hapjeong and Seongsu. This raised interest in Yeouido. But after the Seoul government in 2010 announced the raising of the contribution ratio to a maximum of 40 percent of the land being reconstructed from the previous 25 percent, redevelopment fervor died in Yeouido.

Despite the fact that Yeouido has one of the best residential and transportation environments in the city, it has been an also-ran in the real estate market.

However, things are finally looking up for Yeouido as several redevelopment and reconstruction projects are underway.

They are the first in eight years since the reconstruction of the 39-story residential and commercial Yeouido Xi apartment in 2008. Currently, 16 apartment complexes with 7,787 units are being redeveloped. All meet the basic requirement of being 30 years old or older. Five complexes - Sibeom, Mokhwa, Gwangjang, Miseong, and Sujeong - have taken the first step of organizing a reconstruction management committee.

But the apartment that actually started the reconstruction boom in the neighborhood is Seoul Apartment, located near the Yeouinaru subway station.

The owners of the building’s apartments, which were built in the 1970s, recently selected Yeoui Construction and GS E&C as their primary negotiators, while the final developer will be chosen through a tender offer in July.

In fact, Seoul Apartment has yet to set up a committee to manage the reconstruction. Because it is not in a residential zone but rather a commercial zone, reconstruction is possible without having to seek approval for a design from the district. In commercial zones, redevelopment projects can expand buildings’ floor-to-area ratios by 750 percent, far more than the 200 percent limit in residential zones, allowing more residential units to be built.

As there are fewer than 300 units in Seoul Apartment, it does not fall under the Residential Environment Improvement Law but comes under the Construction Law. As a result, the apartment owners don’t have to create a special committee overseeing the project. They will work with a real estate trust for the project.

Sibeom Apartment is currently reorganizing its committee to manage its reconstruction project, and Sujeong and Hanyang have recently selected the head of their reconstruction committees.

Mokhwa, however, is leaning toward remodeling rather than reconstruction, largely because its floor-to-area ratio exceeds 200 percent. But some Mokhwa homeowners want more time before making a final decision.

Interest in redevelopment in Yeouido started in late 2014, when the government started easing up on reconstruction regulations to stimulate the property market.

In the past, a reconstruction committee for an apartment complex could only be formed when more than two-thirds of the homeowners agreed. From now on, only 50 percent are needed.

An apartment complex of 300 units used to require the votes of 200 households to form a committee for reconstruction. Now, only 150 are needed.

The loosening of the regulation was to encourage more redevelopment projects.

Additionally, apartment complexes seeking reconstruction will be allowed to pay the local government instead of donating land to establish public properties like playgrounds and roads when there is already a well-established infrastructure. This will raise the profitability of reconstruction projects, as more apartments can be built on the land where public facilities may have been built.

The Seoul Metropolitan Government’s plan to refurbish areas close to the Han River created favorable conditions for reconstruction on Yeouido.

The plan eased a regulation that limited the skyline of residential apartments along the Han River to 35 stories. Along with Yongsan District and Jamsil, the Seoul government is allowing Yeouido to build as high as 51 stories or higher when the building is a mixture of commercial and residential spaces.

Because of the redevelopment, apartment values in the neighborhood have been rising. A 139-square-meter (1,496-square-foot) unit in Seoul Apartment was sold for 1.63 billion won ($1.38 million) at the end of last year. Today, it is worth 1.9 billion won. In just five months, the value of the apartment has increased more than 200 million won, or 16.5 percent.

A 126-square-meter unit in Gongjak Apartment last year sold for 1.07 billion won. Today, it is worth 1.1 billion won, a 2.8 percent increase. Other apartments in the neighborhood have seen their value increase around 20 million won so far this year, according to realtors.

“The atmosphere around the reconstruction market recently has been good,” said a realtor in Yeouido. “Expectations around Yeouido have grown as the Seoul Apartment reconstruction project started picking up momentum.”

Market analysts think that once the projects are complete, Yeouido will become a popular residential location like the Gangnam area.

However, some caution about getting too optimistic.

“There will a huge concentration of demand from financial company executives and celebrities because of the location and accessible and convenient traffic conditions,” said Park Hap-soo, KB Kookmin Bank’s senior real estate consultant. “However, it is still not at the stage where reconstruction should be discussed.”

He said that other than Seoul Apartment, most of the apartment complexes in Yeouido wouldn’t be easily redeveloped largely because of the low profitability.

A reconstruction project’s profitability increases when the existing floor-to-area ratio expands significantly after the building is torn down and rebuilt.

“For now, the floor-to-area ratios are in the 200 percent range, and increasing the number of housing units through reconstruction won’t be easy,” said Kwon Il, head of the research team at Budongsan Info, a real-estate information provider.

The will to redevelop by residents of apartments in Yeouido is another variable.

“There are a lot of apartment complexes that haven’t even organized a reconstruction committee, and as a result, there are some residents who are skeptical because the project itself will take a long time while profits from reconstruction are uncertain,” said a realtor in Yeouido.

“The time it would take will be different for each [reconstruction] project, the way it will be conducted will be different and the zoning is different as well,” said Park of KB Kookmin Bank. “For those reasons, investors will have to approach this as a long-term project with a minimum time period of seven and eight years.”