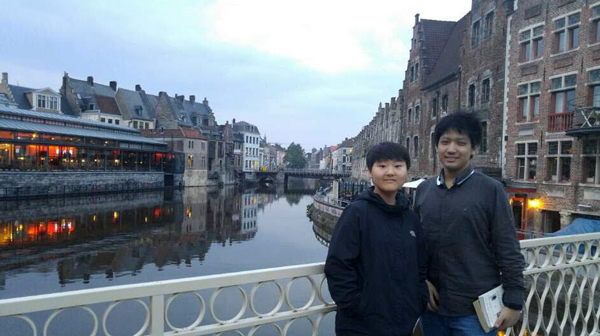 BY LIM SUN-YOUNG, ESTHER CHUNGKim Eui-young, left, and Choi Jung-ho, right, this year’s gold medalists at the International Philosophy Olympiad, an annual international philosophy writing contest, pose together in Ghent, Belgium, on May 12, as they arrived in the city to participate with some 90 other high school students in the four-day contest. “Interacting with the students was the best part of being there,” Choi said. [HOI JUNG-HO]

Two Koreans who claim never to have studied philosophy smiled for the cameras in Ghent, Belgium, after claiming their gold medals at the 24th International Philosophy Olympiad, an annual philosophy essay contest.

All three finalists, the third being a Turkish student, kept their hair closely cropped, though according to finalist Kim Eui-young, a student at Cheongshim International Academy, that does not mean she should be thought of as a boy.

“I am a woman,” Kim wrote in her winning essay, “even if I cut my hair short, pitch my voice low and walk or act like someone of the male gender.”

Competitors were asked to write on four given topics based on the writings of Aristotle, Immanuel Kant, Simone de Beauvoir or Tetsuro Watsuji. Kim’s essay, “Gender as Choice,” was written in response to a line from de Beauvoir - “One is not born, but rather becomes, a woman” - quoted from her work “The Second Sex.”

In front of Kim stood finalist Choi Jung-ho, who wrote on the same topic. Choi, a high school senior at Seoul International School, which he has attended for 12 years now, is an avid reader of the Korea JoongAng Daily.

“I’ve read the paper since I was in the fifth grade,” he said. “I like to discuss social issues with my friends, teachers and parents, and the newspaper is a good tool for me to get to know various concepts and strengthen my thinking.”

Having two gold medalists from the same country is a rarity for the event. Since its inception in 1993, it has happened three times, including this year. It happened in 2005, when two Polish nationals (and a Romanian) won, and in 2008, when two Romanians (and a German) won.

Each participating country, except the host, can submit one to two contestants every year. This year, some 90 high school students flew into Ghent from 40 countries. Each student is given four hours to write a critical essay on one of the topics given, using English, German, French or Spanish. Students are not permitted to write in their mother tongue.

But if there is something else that the two Korean finalists have in common besides their nationality, it would be that they don’t see philosophy as a subject to be studied but rather as a way of life.

“I never studied philosophy,” Choi said. “But someone suggested that I look into the competition, knowing that I’m into analytical thinking.”

Serving as a reporter and an editor in his school paper for a couple of years, Choi came to wonder about what other people think and cited Rene Descartes as one of the thinkers he respects.

“Descartes’s saying, ‘I think, therefore I am,’ really changed the way I think,” Choi said.

Kim, who says she picked up English when she was a kindergartner, often read fantasy novels and science fiction during her elementary and middle school years, then expanded to reading philosophy books later, including “A History of Western Philosophy” by Bertrand Russell and “From Socrates and Sartre: The Philosophic Quest,” by T.Z. Lavine.

“Philosophy and literature are so closely threaded together,” Kim said. “Both make you think about how you can make this world a better place.”

The two gold medalists could not hide their emotion when asked if they had expected to win the contest.

“No,” Kim said, her voice jumping. “In fact, I didn’t really want to do this at first, and when I found out [that I had won], it was very much a surprise.”

“I wasn’t expecting it at all,” Choi said. He also did not expect a story to be written about him.

“It’s quite an honor, really, I didn’t expect things to get this big,” he added. “I’m very happy, to say the least.”

Both winners were at ease and laughed frequently throughout the interview. Now, they say, they are waiting for the next phase of their lives after high school graduation. Kim, for instance, pictures herself as a philosophy professor who writes novels.

“I want to write fiction that tells philosophical stories, to help this world become a better place,” she said.

Choi is expected to enroll at Brown University this fall, and is leaving his options open.

“I don’t know what my major will be yet, but I trust that philosophy will be the foundation that holds me up through all that life has in store for me.”