Amid controversy, the show goes on

Amid controversy, the show goes on 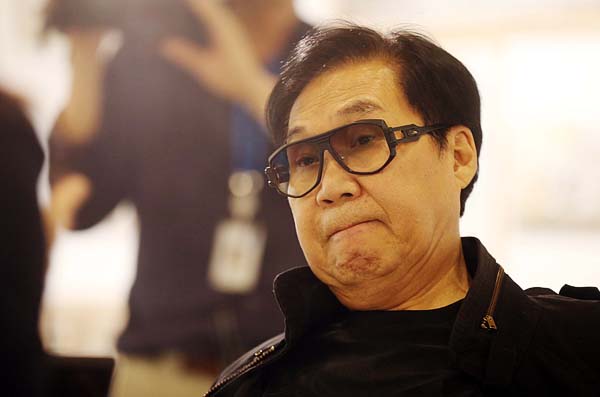 BUSAN and SOKCHO, Gangwon - Celebrity Cho Young-nam, 71, appeared on stage at the “2016 C’est Si Bon Friends’ Concert,” which took place on Saturday at Bexco in Busan.

It was his first appearance before the public since he was charged with fraud for selling paintings that he didn’t create.

At the concert, Cho took to the stage with fellow singers Yoon Hyung-joo and Kim Se-hwan, wearing a dark blue jacket and blue jeans and sporting a mustache.

But he did not begin the show with singing. Instead, after hovering around the stage for an hour, Cho addressed the audience and confessed his state of mind in the wake of the recent scandal.

“I am unable to sing right now due to my [poor] condition. Strong sleeping pills that the doctor prescribed for me make me feel vacant,” he said. “Yoon grabbed my hand and prayed for me before I came up here.”

“There is a saying that you should not play hwatu too much,” Cho said later on during the concert. “I played games for too long, and it ruined my life.”

Hwatu is a Korean card game also known as Go-Stop. Most of Cho’s paintings were inspired by hwatu cards, which feature flowers.

Prosecutors in Sokcho raided Cho’s office and art studios earlier this month in response to reports that another man had been making paintings on Cho’s behalf.

Cho, a singer, author, television personality, radio show host and artist who rose to fame in the 1970s and ’80s, affirmed his innocence in a May 16 phone call with the JoongAng Ilbo, saying all artists employ assistants to help with their work.

Cho and his manager underwent an in-depth examination by prosecutors on May 23 and 26.

Prosecutors revealed on Saturday there were other painters who created works for Cho in addition to Song Ki-chang, 60, who has been identified as a ghost painter who has been creating paintings for Cho for approximately the past eight years.

Song appeared on a prime-time TV news show last week for an interview and said he was “unaware” that Cho was selling the works he created.

He claims to have painted around 200 pieces for Cho, 15 to 16 of which have been found to have been sold. Art industry insiders say Cho’s paintings usually sell for millions of won and up to tens of millions of won.

Prosecutors said on Saturday that they have finished investigating the painters. According to their findings, some of them created entire paintings in place of Cho after he sent them pictures of the works.

They also revealed that the pattern of how Cho paid and requested the creation of new works was similar among the painters.

In the exclusive phone interview with the JoongAng Ilbo on May 16, Cho said he has several “assistants,” which led prosecutors to look for other painters working with the celebrity.

“We can’t reveal how many painters created Cho’s paintings,” a person affiliated with the prosecution said, adding that there is a high possibility that Cho will be examined again by prosecutors sometime next week.