Mobile games the next generation of e-sports

Mobile games the next generation of e-sports 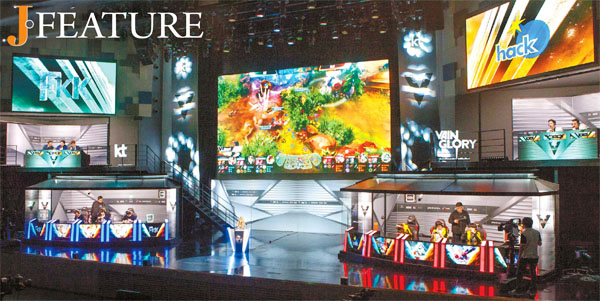 At the “KT Vainglory International Premier League Season 3,” currently being held at Seoul OGN e-stadium in Sangam-dong, western Seoul, through June 5, the 12 best Vainglory teams from around the world are competing for the world champion title. [PARK SANG-MOON]

Korea’s e-sports scene, which has been in decline in recent years, is now eyeing mobile games as a potential savior.

At its peak, in 2004, Korea, practically the birthplace of e-sports, shocked the world with 100,000 live spectators attending a tournament at Gwangalli Beach in Busan. In 2005, Korea hosted 278 sponsored competitions with 50 billion won ($42 million) in prizes, not to mention the absolute dominance of Korean players on the global stage.

However, after a match-fixing scandal in 2010 and new legislation on online games in 2011, e-sports have been losing ground, and those glorious days have become nothing more than a distant memory. To add insult to injury, the main driving force of the Korean e-sports industry, StarCraft, was subject to an intellectual property dispute between U.S. game company Blizzard Entertainment and Korean broadcasters in 2012.

But the “KT Vainglory International Premier League Season 3,” being held at Seoul OGN e-stadium in Sangam-dong, western Seoul, is giving doubters reason to pause. The tournament kicked off May 3 and runs until June 5.

Does Vainglory’s rise indicate the arrival of the mobile game era and the resurgence of Korean e-sports?

The rise of Vainglory

Vainglory is a game specifically designed for e-sports by Super Evil Megacrop, a U.S. start-up comprising designers of highly successful e-sports games. Many of its personnel previously worked for Blizzard and Riot Games, the creator of League of Legends, currently the most popular e-sports game in the world, let alone in Korea.

Within just a year and a half of its launch, Vainglory secured its spot in the e-sports scene by hosting its fourth international tournament, currently ongoing in Seoul.

But it is premature to judge the future of mobile games in e-sports solely based on Vainglory’s increasing popularity because, according to experts, its successful run is more attributable to its genre than the platform.

“There are certain elements that games need to have in order to be successful in the e-sports scene,” said Kim Sang-woo, a longtime OGN game critic. “The game has to be fun to watch, broadcast-friendly and have a definite winner and loser.”

Vainglory’s genre - multiplayer online battle arena (MOBA) - certainly fits those criteria. The game features two opposing teams of three players. By controlling a unique hero with unique abilities, the players must destroy each other’s bases, which lie behind rows of turrets and minions. The MOBA genre’s fun-to-watch and all-or-nothing nature have been proven through the success of League of Legends. 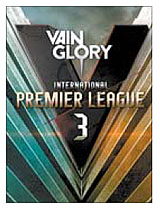 Korean broadcasters have already developed a broadcast format suitable for games of this genre, but it is uncertain whether it can be adapted to mobile games, according to Kim. Mobile games usually significantly lack strategic elements and have far shorter playing times per game. Broadcasters will have to come up with new broadcast formats catering to different game genres, otherwise the tournaments may fall flat. Playing and watching are, indeed, different kinds of fun.

Mobile devices’ relatively unstable internet access is another hurdle. According to Kim, the unstable wireless connection method could not only cause problems during live broadcasts but also “inhibit players from pulling off their full potential.”

Furthermore, in professional sports, the expressions of players are an important element of the game. Instead of looking forward at a computer screen, mobile e-sports players tend to look downward at their devices, making it hard for cameras to catch the split-second reactions of players at key moments in the competition.

But what Vainglory did to demonstrate the potential of mobile games in e-sports was the broadcast-quality graphic display and sophistication of both the game and the devices. The lack of keyboard and mouse did not cost much in terms of mechanical sophistication, either.

“The audience would not guess that Vainglory is a mobile game if not previously told,” Kim Young-je, leader of the Korean team Invincible Armada that made it to the semifinals so far in the current season of the Vainglory International Premier League, said with confidence.

Up-and-coming mobile games like Nexon’s H.I.T and Netmarble’s Raven, for example, also boast graphic quality on par with computer games of similar genres. And unlike computers, smartphones are carried at all times. Their high accessibility has bred games with shorter playing times and lower barriers to entry than computer games.

As has been shown with Angry Birds and Anipang, the accessibility has the potential to draw more and more diverse players. According to a report from mobile consumer behavior research company Reality Mine last June, 70 percent of women played mobile games as opposed to 66 percent of men, and those aged 35 to 64 accounted for more than 50 percent of all mobile game players.

“There is the rise of Vainglory leagues in North America and Europe. Major e-sports teams in the West like TSM, SK Gaming and G2 all started picking up teams and running them,” said Christopher Mykles, better known for his stage name, Monte Cristo, who has been working for OGN as an English commentator and is the co-owner of North American professional game team LA Renegades.

In the large market of China, it is not just Vainglory that is getting attention. Many IT giants, including Chinese company Tencent, are putting an enormous amount of resources into mobile e-sports. The Chinese Ministry of Culture created the Mobile Esports Game Association in February, and the “Mobile Esport Game Event” is being held nationwide under the stewardship of the General Administration of Sport.

The explosion in mobile e-sports has triggered heavier investment from local Chinese IT giants, and the industry is expected to double by 2019, according to Asian game market intelligence firm Niko Partners. Recently, China’s leading e-commerce company, Alibaba, invested $15.5 million to host 1,200 e-sports events in 2016 alone.

“I believe that all games will inevitably be made for mobile in some way, shape or form, thanks to the accessibility of mobile games,” said Um Jae-kyeong, a member of the iconic Um-Cheon-Kim trio of commentators from StarCraft’s heyday in Korea. “Mobile games are the destined path for the e-sports industry.”

The Korean e-sports industry has jumped on the global mobile game bandwagon. “The industry definitely is acknowledging and reacting to the transition at hand: from computer games to mobile games,” Um noted.

By selecting HearthStone: Heroes of Warcraft as an official e-sports game last June, the Korea e-Sports Association has started showing interest in mobile games. HearthStone: Heroes of Warcraft is an online collectible card game that is playable on both computers and smartphones. The association is constantly testing the potential of different mobile games, holding small tournaments of various sizes.

ES Games, a start-up run by a former manager of a professional e-sports team, Kim Hyun-cheol, launched an e-sports training course in October. The five-month course, which is sponsored by the Ministry of Employment and Labor, has so far graduated two classes.

“Not only does the course deal with e-sports history and the business ecosystem, it also preaches staying on top of the latest trends,” Kim said. “Some of the sub courses of the curriculum - ‘E-sports Business,’ ‘E-sports Competitions’ and ‘E-sports Marketing’ - deal with virtual reality games and mobile games.”

Recently, the second-largest mobile carrier in Korea, KT, stepped up to sponsor this season of the Vainglory Premier International League, demonstrating its strong foothold in the e-sports scene. But the league’s success would not have been possible, or at least would not have happened so quickly, if it were not for the dominance of the Korean team. E-sport, at the end of the day, is a professional sport that fans watch to see their team win.

“Korean teams have been consistently placing in the top four teams,” Mykles said. “I do think the North American teams are still the best, but teams like Invincible Armada can definitely give them a run for their money.”

Invincible Armada has proven its dominance in mobile games by winning the title at the first official international Vainglory league, the “Vainglory World Invitational,” placing second in the “Vainglory International Premier League Season 2” and making the final four so far this season.

The rise of StarCraft: Brood War in the 2000s was largely due to star players like Lim Yo-hwan (BoxeR), Hong Jin-ho (YellOw) and Kim Dong-soo (GARIMTO). Looking at the successes of Invincible Armada, bringing back the golden days of e-sports may not just be a pipe dream.