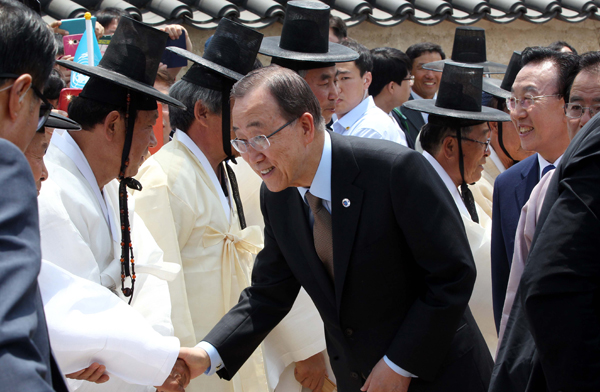 UN Secretary General Ban Ki-moon led all potential presidential contenders in a poll after he made the strongest hint yet of a possible run in next year’s election.

In a poll conducted by the JoongAng Ilbo on Friday and Saturday of 1,000 eligible voters nationwide, respondents were asked who they would like to see as Korea’s next president.

Ban topped the list with 28.4 percent, followed by Moon Jae-in of the Minjoo Party of Korea with 16.2 percent. Ahn Cheol-soo, co-leader of the People’s Party, came in third with 11.9 percent.

The poll was seen as a testament to Ban’s far-reaching appeal to voters and a favorable image formed by his 10-year leadership of the United Nations.

Seoul Mayor Park Won-soon, who expressed an objection to Ban running, citing a UN resolution that calls on UN chiefs to refrain from taking government jobs, came in fourth with 7.2 percent, trailed by former Saenuri Chairman Kim Moo-sung with 4.2 percent.

In a three-way race with Moon and Ahn, both from the liberal bloc, Ban was far ahead of the two, with 45.7 percent of support, while Moon received 24.6 percent and Ahn had 20.1 percent. Of all respondents, 9.7 percent said they didn’t have a favorite.

The poll, with a margin of error of plus or minus 3.1 percentage points, was conducted after the 71-year-old UN chief strongly hinted on Wednesday of his interest in running for president. Ban said at an event in Jeju that he would ponder his role after his UN tenure ends at the end of this year and that at 71, he wasn’t too old to run.

While Ban is an early favorite in the poll, it remains to be seen whether he is ready for the rough and tumble of Korean politics.

It is also expected that Ban, widely respected in his homeland, will have to answer some hard questions about his leadership at the United Nations. 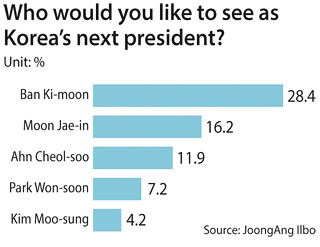 The latest criticism of his tenure came in last week’s edition of The Economist, which called him “the dullest” and “the worst” among all eight UN chiefs in history. It went on to describe Ban as “painfully ineloquent, addicted to protocol and lacking in spontaneity and depth.”

Ban continued to give signals about a bid for the presidency over the weekend by meeting with a group of retired politicians, including two-time Prime Minister Kim Jong-pil.

Ban, who is on a six-day stay in his homeland, visited Kim’s residence in Seoul on Saturday morning and had a one-on-one meeting with Kim, a 90-year-old former statesman who used to be called “kingmaker.”

Ban’s meeting with Kim, whose political career spanned over 40 years, stirred speculation that the UN chief was taking steps to raise his profile and cement his standing as a presidential candidate.

Kim told reporters that they had a “secret talk.” When asked if the two discussed Ban’s possible presidential bid, Kim neither confirmed nor denied it.

On Ban’s part, he told reporters that he had explained to the veteran politician what he had accomplished during his tenure at the UN.

“He encouraged me to fulfill my mission to the end,” Ban said.

The significance of Ban’s meeting with Kim stems from the fact that the two are both natives of the Chungcheong region, which has long been considered a crucial swing region in elections. Political commentators expect Ban could capitalize on his roots in North Chungcheong.

It is expected that if Ban declares a bid, he will do so as a conservative Saenuri candidate with support from ruling party members loyal to President Park Geun-hye. Those who champion a Ban bid say they can rely on votes from his native Chungcheong as well as the conservative Gyeongsang area, with help from Park supporters.

Ban did not deny a possible political advantage as a Chungcheong native when asked about it on Saturday. But he also said, “I am not in a position to state my position [on such a notion].”

Ban attended a dinner on Saturday with a group of retired politicians and government officials, including four former prime ministers. Among the participants was Goh Kun, who served as prime minister under the Roh Moo-hyun government and ran a failed presidential bid in 2007.

Shin Kyung-shik, a four-term former lawmaker who joined the dinner, said Ban did not discuss domestic politics. “We mostly talked about his UN activities,” he told reporters.

On Sunday, Ban visited Andong and Gyeongju in North Gyeongsang after he attended the Rotary International Convention in Goyang, Gyeonggi.

Ban’s visit to North Gyeongsang and his plan to spend two days there, a traditional stronghold of the ruling Saenuri Party, led political observers to view it as an attempt to appeal to conservative voters there.

Ban will wrap up his trip to Korea on Monday after an appearance at an UN-related event in Gyeongju.