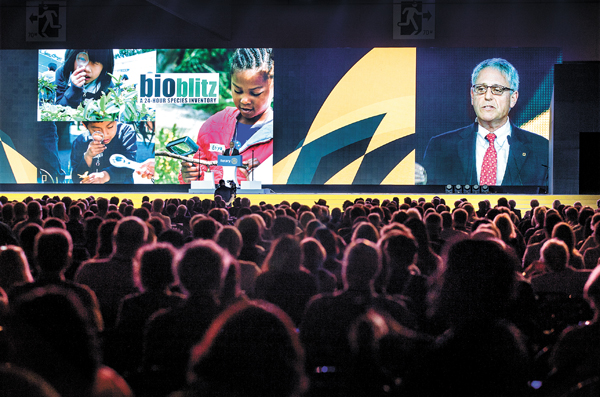 Gary Knell, CEO of National Geographic Society, speaks on Monday to tens of thousands of Rotarians at the second general session of Rotary International Convention at Korea International Exhibition Center in Goyang, Gyeonggi. Knell announced that a National Geographic project, BioBlitz, which invites students to explore and identify as many species as possible in a given area over a short period of time, will launch in Korea in June. [PARK SANG-MOON]

Tens of thousands of Rotary club members from some 160 countries gathered once more in the Korea International Exhibition Center in Goyang, Gyeonggi, to discuss what the 1.23-million member group of volunteer leaders can do to “Be a Gift to the World,” the Rotary International’s theme this year.

Many speakers urged Rotarians to do more.

“Ask not what this convention can do for you, but ask yourself as a Rotarian, what value you can add to the convention,” said Mahatria Ra, a spiritualist from India, using the oft-quoted statement by U.S. President John F. Kennedy.

“It is communities like Rotary that will explore and change the world,” said Gary Knell, CEO of National Geographic Society. He shared stories of an explorer preserving tigers in India, an ecology doctor preserving marine life and a scholarship grantee planting some 10,000 trees with Masai children.

Knell emphasized the importance of educating children to take ownership of the planet.

“The work at National Geographic is creating a sense of ownership in the next generation,” he said. “These children feel they own the trees they planted, and that they own the responsibility to protect their own environment.”

“Since the Arab Spring, we have seen a massive amount of looting in Egypt,” she said. “My team and I have mapped this looting, using open source satellite data from 2002 to 2013, and we found looting at 267 sites and over 200,000 looting pits.”

“Looting got worse in 2009, after the global recession, and is a global problem that speaks to Rotary’s work to improve economic development in many parts of the world.”

Parcak is currently building a project using her prize money from TED to create an online platform open to all citizens to monitor looting.

Some speakers were former recipients of the Rotary’s service.

“Finally, I have the opportunity to thank the entire Rotary family for investing in a life-changing moment for me,” said Gary Haugen, founder and president of the International Justice Mission, a human rights organization that rescues victims of slavery and sex trafficking. Haugen is a former Rotary scholar.

Using data from 2014 Global Slavery Index, Haugen urged Rotarians to take action for the nearly 36 million people currently enslaved, which he said is three times the size of those extracted from Africa during the 400 years of slave trade. According to the International Labour Organization, traffickers are making some $150 billion a year in illegal profits, as of 2014. “That’s more profit than Coca-Cola, Disney, General Electric, IBM, Chevron, Wells Fargo and ExxonMobil [make in a year] combined,” he said. “The ancient evil by which one human owns another and uses violence to force them to work thrives in our world like never before.”

Many speakers praised the Rotary’s work and spirit.

“That’s the beauty of rotary, all of you are able to go to the darkest, deepest corners of this world and identify people, to give them compelling reasons to triumph,” said Dananjaya Hettiarachchi, 2016 Toastmasters International World Champion of Public Speaking. He is the first Asian to win the title, though it took him 10 years.

“Through your great work you can paint a story for the most unfortunate people in the world,” he said, “a vision of success and hope that their tomorrow can be better than their today.”