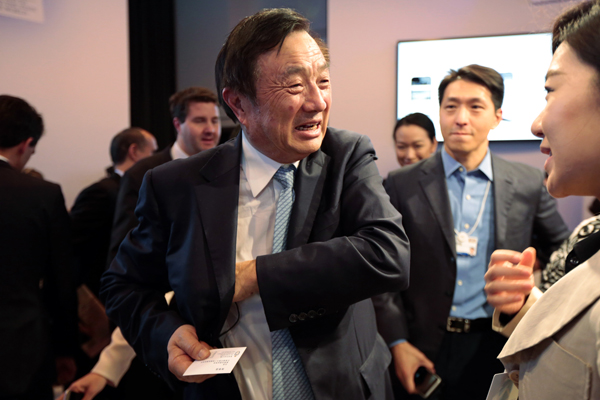 Ren Zhengfei, president of Huawei Technologies, center, reacts as he leaves a session on day two of the World Economic Forum in Davos, Switzerland, on Jan. 22, 2015. [BLOOMBERG]

Anything about China – whether it is the authorities, system, market, or enterprises – is strangely met with curiosity, suspicion, and imagination. Huawei Technologies’ first intelligent property lawsuits against its larger South Korean rival Samsung Electronics has come under the same scrutiny.

Huawei handed in a 47-page petition in a U.S. court accusing the world’s largest smartphone maker of infringing on 11 of its patented technologies in fourth-generation (4G) cellular communication and user interface software. Instead of investigating what the technologies were, media attention was entirely on the motive behind the lawsuit and what ultimate gain the Chinese company was after.

Political interpretation was being applied on technical issue of intellectual property. Industry watchers say Huawei has nothing to lose by challenging the Korean electronics behemoth. The fact that a Chinese company still dogged by the stigma of profiting from pirating and advancing through copycats has raised patent issues with a bigger counterpart works is favorable publicity on the ascension of Chinese technology. The strategy also is in line with the so-called IP umbrella championed by Huawei founder Ren Zhengfei, claiming co-sharing of licenses would be like “buying a ticket to the world.”

Huawei lags just behind Samsung and Apple in global smartphone rankings, but its phones are sold mostly in China and Southeast Asia. Its share in developed markets takes up a paltry1 percent. To crack into the advanced markets, it has to pass the IP test. Its strategy is working as the company has struck cross-licensing deals with Apple, Qualcomm, and Ericsson. It has challenged Samsung to bring it under its IP umbrella. One industry specialist said Huawei was applying the same strategy it tested successfully on Ericsson and Samsung. After filing suit on patent infringement against Ericsson, Huawei instead settled the affair through a cross-licensing arrangement.

The strategy could be borrowed from the art of deception from ancient Chinese warfare methodology. The enemy posing as a guest kicks out the owner of a fortress. Under the IP umbrella where lines over patents are blurry, one can deceive the owner through claims and turn things in its favor.

The methods China employs are far from the customary practices of the global standard, but strangely they work. U.S. companies that are usually highhanded toward Korean counterparts comply with the Chinese ways in China. Qualcomm, which has profited most from its biggest client Korea by pocketing royalties on CDMA technology, agreed to pay a record fine of $975 million to Chinese authorities when it accused the U.S. technology giant of violating the country’s anti-monopoly law. It also adjusted patent-licensing fees for Chinese cellular phone makers and offered to invest in China’s semiconductor facility.

Even the biggest in the world cannot afford to lose the world’s largest consumer market. Multinationals somehow have to adjust to China’s terms even if they shake the fundamentals of global standards. What they fear is not the ascension of China’s technology, but its colossal market.

Samsung Electronics will likely come up with its own strategy against its Chinese rival. But the unorthodox ways of China will likely pop up in many fields in the future. All the global standards we were forced to familiarize ourselves with since the international bailout in late 1990s are of no use against China. Instead we must refer to the ancient books of warfare strategies to decipher the real intentions of China. We inevitably will have to use our imagination and come up with inventiveness to cope with the Chinese ways.