Lippert calls for Korea’s red tape to be reduced

Lippert calls for Korea’s red tape to be reduced 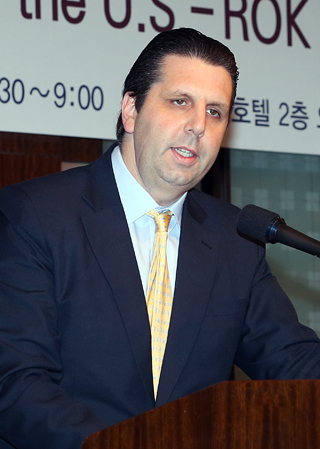 U.S. Ambassador Mark Lippert said Korea is still a hard place to do business in and urged its government to ease regulatory burdens, particularly for foreign law firms.

“There is widespread recognition that there are too many business regulations that are unique to Korea,” Lippert said at a forum held at the Westin Chosun Hotel on Wednesday.

“Korea’s unique regulations continue to force companies to speak two regulatory languages. One here, and at least one other language in overseas markets. This obviously creates inefficiency, for not just U.S. firms but also for Korean firms.”

Lippert once again stressed the importance of opening up the market for legal services in Korea. The ambassador pointed out that Korea needs to do so in order to fully implement the two countries’ free trade agreement.

“Korea needs to open up the legal service sector, such as those restrictions on areas in which lawyers can practice,” he said.

“This will improve the quality of legal counsel, create new jobs and expand employment choices. It will also reduce legal fees for companies doing business in Korea, making firms more competitive, and help them reduce costs on their balance sheets.”

In the Korea-U.S. Free Trade Agreement, Korea agreed to fully open the legal market to American firms by March 2017. However, the National Assembly passed the Foreign Legal Consultant Act in February, which prohibits foreign law firms from owning a stake greater than 49 percent in a joint venture.

In his 30-minute speech, Lippert spent more than 20 minutes talking about regulatory issues.

“[In Korea] regulations often lack common and clearly defined standards for interpretation, and when officials change jobs, circumstances change, and interpretation and application of these regulations can rapidly change,” he said. “Regulations are often constituted with a short time horizon and often without sufficient consultation with Korean and foreign stakeholders, or those most directly affected by the regulation.”

Lippert added that if the two countries had a common regulatory language, it would help their economies work better and help companies find more opportunities.

“We now have a historically unique opportunity to work together, and a recent OECD economic survey noted that structural reforms the Korean government has presented have great potential and could help exports to grow,” he said. “I am very optimistic [about the regulatory issues] because the two countries share common views.”

“Since 2012, the overall trading relationship has grown nearly $130 billion to almost $150 billion, and Korean foreign direct investments in the United States doubled to $36 billion,” he said. “The United States is the largest foreign investor in South Korea, investing $5.5 billion last year, and Korea is now the sixth-largest trading partner of the United States.”

Lippert mentioned the importance of the Trans-Pacific Partnership (TPP) and Korea’s possible participation. “Korea is well positioned for TPP, but joining TPP will not be automatic. It will require Korea to make new commitments in a number of areas such as trade, labor and environment.”

Wednesday’s forum was hosted by the Institute for Global Economics, and a number of senior government officials and businessmen attended.