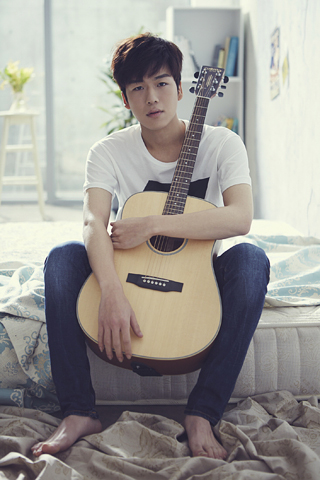 Singer-songwriter Kwak Jin-eon, the winner of Mnet’s “Superstar K6” in 2014, made his official debut last month by releasing his first album, “Go With Me.” [JOONGANG ILBO]


Some may be surprised to find out that Kwak Jin-eon, 24, who already gained a sizable following after winning Mnet’s audition program “Superstar K6” in 2014, is only now making his official debut.

Upon releasing his first album, titled “Go With Me,” on May 10, the singer-songwriter snapped into full-time performer mode, announcing dates for upcoming concerts and TV appearances.

Tickets for his five-day concert series that runs until Sunday at the Hyundai Card Music Library’s Understage in Itaewon, central Seoul, have already sold out as soon as they went on sale.

His fans all say that Kwak’s unique baritone voice goes beautifully with his folk-style guitar-led songs. Listeners describe his voice as soothing and healing.

To learn more about his new album, which Kwak produced and wrote on his own, Ilgan Sports, an affiliate of the Korea JoongAng Daily, recently sat down with the singer-songwriter for an interview. Here are some edited excerpts.

Q. It’s been quite a long time since you won first place on “Superstar K6.” How have you been?

A. After the program was over, the first- and second-place winners had a lot of other schedules we had to cover under the contract, so I was really busy. When I completed all the duties that I had to do, it was already March. Meanwhile, however, I was able to use the time to write songs and sign a contract with an agency and finally get my first album ready. It took me about a whole year to work on my first album.


That sounds like quite a long time to prepare an album, isn’t it?

Yes it is. It took me a long time. Even though it’s a regular album with 11 tracks, I heard it’s quite rare for an artist to work on one for a whole year. But I produced it by myself and wrote all the songs, so as a newbie in this business, it was a new road for me, and I ran into confusion along the way.

You signed with a small agency called Music Farm. Although the name is not well-known, it represents many veteran singers and songwriters like Kim Dong-ryul and Lee Juck. Did you get a lot of advice from them?

Both of them actually told me that I have to create my own “color” and said that if they get involved in my songwriting in any way, that will spoil my color. But they did give me good words of advice.


What kind of advice did they have for you?

They were all helpful ones. I tend to be very greedy, so I was writing songs, erasing them, including some parts, taking out parts and repeating this process all the time. When they saw me doing this, they told me that I might be able to see what I really want if I loosen up a little and stop being so greedy.

When I asked them to listen to my songs, they just didn’t vaguely say they liked it, but gave me real details of where I should improve and which parts they liked.

Kim Dong-ryul, especially, is such a warm-hearted person that I was actually surprised. He is a lot older than me, and before I even asked him about my songs, he found them and listened to them and told me what he thought about it. It was really touching.


Are you satisfied with your first album?

At this point, I don’t think my satisfaction really matters. What matters is whether I feel affection toward each and every song. That way, I believe the listeners will understand my sincerity. I don’t think there’s such thing as “perfect” music. I just hope people realize that I’ve put all my effort and affection and sincerity toward all of the songs.


Did you have any difficulties in producing your first album?

Creating a sound source was very different from holding concerts. I’ve done a lot of concerts, and for them, I just performed as I felt. They are very emotional. But working on an album, you have to follow a strict system, and it was difficult for me to adapt myself to that. I guess I didn’t know a lot about recording.


Your title track, “Go With Me,” is a very melancholy song. Did you intend it?

Yes, it’s the very first song that I wrote. I wrote it when I was 19. Back then, I was preparing to enter college and I was dating. I have a lot of memories of spring and summer. I think that’s why I used the word “sunshine” a lot.

But when I was working on the song to include in my album, the song somewhat became melancholy in the process. Back then, I remember I wrote the song with quite a warm heart, but now when I listen to it, it kind of sounds quite lonely and cold. I guess my preference has changed.


What’s the concept for your new album?