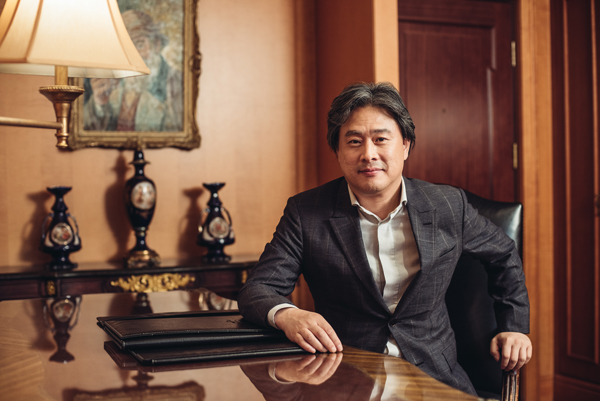 Director Park Chan-wook has set a new bar in his career with his latest film, “The Handmaiden,” which opened in Korean theaters yesterday.

When he filmed “Stoker” (2013) in Hollywood for the first time, he regarded the work as the start of a new chapter of his art form.

Following the psychological tension he showcased in his previous films including “Thirst” (2009), in his new film Park focused on the tension between the two female characters in a more sophisticated and refined manner.

Korea in the 1930s serves as the backdrop for “The Handmaiden.” Lady Hideko, played by Kim Min-hee, and Sook-hee, played by Kim Tae-ri, share a delicate emotional connection.

Park has created characters that are more vehement and daring than those of the original novel, “Fingersmith,” written by Sarah Waters.

“I wanted the female characters to be independent and lead the main story line,” the director explained.

Q. Which part of “Fingersmith” most intrigued you?

A. I felt that I was stabbed in the back when I learned the twist of the novel. I especially liked the two female characters. Also, I wanted to portray the character of Gentleman as a weightier role in the film. As the novel described the time period vividly, I also pursued the same in my movie. I have not done a costume drama before, so it was an interesting challenge.

Why did you choose the 1930s as the setting for the film?

The period I sought required the existence of maids and the modern facilities such as asylums. So it turned out to be 1930s. The conflict between tradition and modernity was inevitable in that era. I was able to deliberate on how the conflict has affected the mind sets of the present generation and how things have changed.

Why did you use the same format of the novel, which uses the interchanging perspectives of the subject and the object?

I find it as the most attractive aspect in the novel. I was inspired to make such structure into the theatrical form, which rendered a whole different style. “Sympathy for Mr. Vengeance” (2002) has a similar format. I think I am very much interested in those kinds of structures. If the same incident is told from another viewpoint, the unseen stories come up and hidden meanings are uncovered. I wanted to make it a 3-D movie, but due to lack of budget, I had to give up on that plan. For this film, I prepared each part in different shots by varying the camera angles, movements and so on. Meticulous work was required for these differing shots.

What were the elements in the novel that you thought necessary to include in the film?

The changing perspectives, the first twist in the plot and the relationship between the two women. These were the essential parts that must be put on screen. In addition, the scene where the maid uses a silver thimble and grinds the teeth of the lady was necessary to include, too.

How did you plan to make the film overall shocking with the additional twist, just like “Oldboy” (2003)?

“Fingersmith” is a widely read book worldwide, so I decided to make a new twist that does not exist in the novel. It reflects how I thought of the plot as progressing while reading the novel and imagining a new twist of my own. Thus, the later part of the film will surprise those who read the original text.

Which sentiment did you try to emphasize when the lady and the maid were assured of their feelings toward each other?

It is an intimate relationship like the friendship between two women. Maybe, their psychological motivation could be perceived as solidarity between sisters. Anyway, I wanted to portray more of pure love between the two.

Why did you describe the film as your most unusual yet multidimensional film?

It has a lot of dialogue and characters. Also, this is my first costume drama, and it has a happy ending with didactic morality. I had difficulty writing dialogue that was appropriate for the historical period and that was not too heavy for the viewers to understand. The archaic expressions of the era are funny and witty, but also devious, which makes it confusing for today’s generation. Hence, I had to balance the level of dialogue.

What parts did you pay attention to most when creating the setting?

First of all, the architecture has to be conspicuous on screen because it acts as an essential element in the film. The style of residence is decorated with a mixture of Western and Japanese style, with a hint of Korean traditional patterns. Second, the place has to mirror the inner aspects of characters as well as the time period. For example, since the Western-style room and the Japanese-style room are adjoined, the gestures of the characters are quite ambiguous. When the character goes into a room with Japanese-style flooring called tatami, wearing formal Western attire, he takes his shoes off. It is very humorous but it expresses the conflict produced by the inter-cultural period of the 1930s.

Is there a reason that the library of Uncle Kouzuki (Cho Jin-woong) is more glamorously decorated?

The library plays a role in the film like another character. It is the place where Kouzuki reigns and many things happen as well. Except for Sook-hee, the three main characters meet and separate in that specific space. The grand and overwhelming atmosphere of the room reflects the inner self of the uncle as well as Lady Hideko. It is the place where she has been strictly disciplined.

Isn’t Kouzuki an unconventional character considering other characters in films set in the Japanese colonial period (1910-45)?

He is not the kind of person who seeks profits by being pro-Japanese. Instead, he thinks Japan is beautiful and Korea is ugly. His tastes well match with Japanese style. Ironically, even though he despises Korea, he eats Pyongyang-style naengmyeon, or cold noodles, for a late-night meal. He possesses multiple characteristics.

How would you compare this film to music, as you are a fan of classical music?

I wrote the script with allusions to chamber music. Like the minutely organized chamber music, the dialogue is intimate but clashes and resolves again. As there are four main characters, it reminded me of Franz Peter Schubert’s pieces for string quartet. Two women characters take the role of the main violins, Count Fujiwara (Ha Jung-woo) as the viola, Kouzuki as the cello. In some scenes, the characters swap roles and take on another position and instrument. Before shooting the film, I handed out some CDs such as Johann Sebastian Bach, Wolfgang Amadeus Mozart and Robert Schumann in order to stimulate the actors’ imaginations.

Why did you select the theme of women again after your previous film, “Stoker?”

After filming “Sympathy for Lady Vengeance” (2005), I began to have interest in female characters. In “Thirst” (2009), Sang-hyun (Song Kang-ho), a devout Catholic priest, has many feminine aspects as well. I wanted to see a female character, who is independent and active, and even frightening, so probably unconsciously I created such characters for my films. These days, there are only a few films where such characters appear, which made me more eager to produce such films. Furthermore, society is very patriarchal and male-centered, which ironically made me focus more on women’s issues. I live with my wife and daughter, and such surroundings act as a stimulus for me in designing interesting female characters.

Will this film also be a popular movie for the public?

I always make my films to be entertaining movies. Sometimes when it matches with the tastes of the public, it becomes an entertaining film, but sometimes it doesn’t. But this time, I did not plan to produce the film to be merely entertaining. As a fan of the original novel, I wanted to portray my wish for the plot line when I was reading it in the film. And I hope moviegoers will feel the same.

What do you mean by saying “Stoker” was the start of a new dimension of art in your filmography?

After finishing filming “Thirst,” which took up a large part of my life, I felt like an emptied drawer. When I began to feel that I have to get into a new field, I got call from Hollywood. That is how I filmed “Stoker.” I did not have a specific direction for the film. Maybe, I could go back to my original style of dealing with guilt and redemption.

Will your next film be the Hollywood movie?

I don’t know. It is my wish to go back and forth in between Korean film and Hollywood film. Everything does not go as you wish. The only thing that I know for sure is I do not want to become gentler as I get older.

Left: Director Park Chan-wook works with the actors and staff on the set of “The Handmaiden.” Right: The official poster for the movie, which opened in theaters nationwide yesterday, showing the four lead actors, clockwise from bottom: Kim Min-hee, Kim Tae-ri, Cho Jin-woong and Ha Jung-woo. [CJ ENTERTAINMENT]