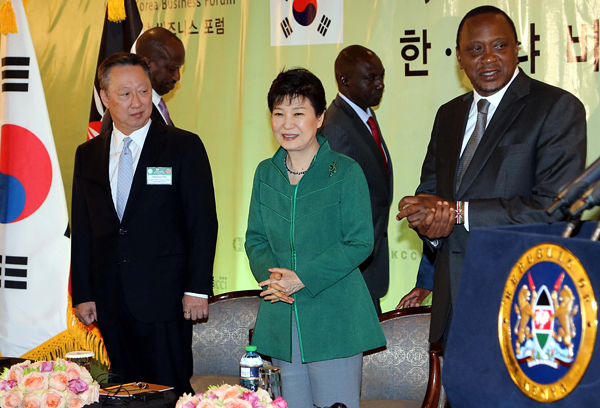 Wrapping up her three-nation Africa tour, President Park Geun-hye headed to Paris on Wednesday for her state visit to commemorate the 130th anniversary of Korea-France diplomatic relations.

Park has, since May 25, visited Ethiopia, Uganda and Kenya. This was her first trip to Africa since she took the office in 2013, and the Blue House said the trip completed her global diplomatic network, meaning that as president she has now visited every continent except Antarctica.

During her trip, Park made efforts to seek the African countries’ support in isolating North Korea for its continued nuclear and missile development. At the same time, she promoted her administration’s new development project, Korea Aid, and expanded business and economic cooperation with the continent.

One of the key accomplishments of the trip came during her visit to Uganda, a longtime ally of the North. During a summit with Park, Ugandan President Yoweri Museveni ordered his government to cut all security, military and police cooperation with the North, marking a victory in the South’s diplomatic campaign to isolate Pyongyang. He also vowed that Uganda will faithfully implement UN resolutions imposed on the North.

The development was particularly significant because Museveni has maintained a close relationship with the North for decades. After taking office in 1986, he visited North Korea in 1987, 1990 and 1992 and met with Kim Il Sung, the North’s late founder and grandfather of the current ruler Kim Jong-un.

Park is the first South Korean president to visit Uganda since the two countries established diplomatic ties in 1963.

Ethiopia, where the headquarters of the African Union is located, also vowed to support the international community’s efforts to end the North’s nuclear program, condemning the North’s nuclear and missile tests and vowing to implement UN resolutions.

In Africa, Park also promoted the Korea Aid project, a newly-launched official development assistance (ODA) program. The three elements of the Korea Aid project-K-Medic, K-Culture and K-Meal-enable Korean volunteers such as doctors, cooks and technicians to travel the countryside offering their services.

The project will be implemented in the three countries and the Blue House said the program is intended to create a new model of cooperative understanding and stimulate a favorable business atmosphere in Africa with regard to Korean companies.

According to the Blue House, a total of 76 memoranda of understanding on economic projects were signed during Park’s visit to the three countries. Park’s trip also created a favorable atmosphere for Korea to win $2.8 billion worth of projects including an oil refinery construction project in Uganda.

The South Korean government also announced a plan to build a Korean textile complex in Ethiopia and an industrial complex in Kenya.

In France, Park will focus her diplomacy on promoting Korean culture, also known as Hallyu. She is the first Korean president to have a state visit to France in 16 years after President Kim Dae-jung in 2000.

On Thursday, Park will attend KCON, the international K-Pop convention, to be held in Paris. It is the first time that the event will be hosted in Europe. Popular Korean idol groups will perform and about 60 Korean companies will showcase Korean food, education and cultural products.

According to the Blue House, all 10,000 KCON concert tickets sold out within three hours when sales began in April. An additional 2,500 seats were offered and the tickets for those sold out in less than one hour. Audience members are not only from France but also other European countries including England, Germany and the Netherlands.

According to the Blue House, France also hosted a week of Korean culture this week at nine major cities around the country.