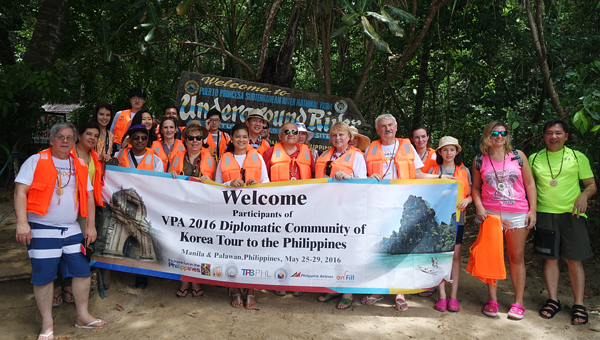 A group mostly comprised of foreign diplomats stationed in Korea poses last Thursday at the Puerto Princesa Subterranean River National Park in Palawan during a tour sponsored by the Philippine government. [PHILIPPINE DEPARTMENT OF TOURISM]

PUERTO PRINCESA CITY, the Philippines - When Philippine Ambassador to Korea Raul Hernandez took up the role in 2014, representing an island country where tourism made up roughly eight percent of the nation’s gross domestic product, he turned to Korea to give the local economy a boost.

Nearly 1.2 million Koreans visited the Philippines that year, accounting for nearly one-fourth of all international arrivals, more than from any other country.

Based on data from the Philippine Department of Tourism, visitors from Korea generated the highest expenditure, 61 billion pesos ($1.3 billion) in 2014, or 32.8 percent of all international tourism receipts.

Finding new ways to attract more visitors became a serious task. One project Hernandez pioneered, less than a year after starting work, was inviting Korea’s foreign diplomatic community to Cebu and sponsoring a large portion of their travel fees.

With that initiative ending on a positive note in 2015, a second such tour was organized last week to Palawan, the largest island province in the Philippines in terms of total area, standing at 450 kilometers (279 miles) in length and 50 kilometers in width.

Together with the Philippine Department of Tourism, the Tourism Promotions Board, the Philippine Embassy in Seoul and the travel agency Onfill, Hernandez escorted a group of some 30 people, comprising diplomats from 13 embassies and their families.

Each participant was charged $740, about half the usual price, and several reporters from Korean media were invited, as well.

Speaking with an air of confidence on the last day of the five-day trip, which wrapped up on Sunday, Hernandez said he was already organizing a third trip, which will see Korean businessmen come to the islands.

“I want them to get to know how fun it is in the Philippines,” he said, “to get to see our tourism destinations and experience our hospitality and generosity.

“We would later like to invite Korean businessmen who would be interested in business opportunities in the Philippines,” the top envoy added, saying that a trade exhibition of possible exports could help Korean executives gain familiarity with their neighboring country.

Due to the absence of a direct flight from Korea, the team had to embark on a three-hour Philippine Airline flight from Incheon, stopping midway in the capital of Manila, before taking another plane to Puerto Princesa, the capital of Palawan.

Populated by some 255,116 people as of 2015, the tropical city is home to white powdery beaches, wildlife refuges and the world’s longest navigable underground river, the Puerto Princesa Subterranean River National Park.

The group’s itinerary was highlighted by most of the city’s gems, including the river tour, a visit to a crocodile farm, island-hopping at Honda Bay and firefly-watching on Iwahig River.

An ambulance shadowed the tour bus to every spot, while police officers kept strict watch for any unwanted intruders. Hernandez stressed that safety was a priority during the trip.

“I wrote letters to agencies and local governments who would participate in the tour to make sure the tour would be safe,” he said. “We received all the support we needed from ambulances and police officers.”

Raquel Otero, 12, the daughter of Luis Pablo Ossio, minister counselor at the Embassy of Bolivia, said upon finishing the tour, between giggles, that her favorite program was the third day’s Honda Bay island-hopping.

“I was bitten seven times by mosquitoes and it itches a little,” she said. “My skin burned, too, even though I put on sunblock. My dad was screaming in the morning because his burns hurt.

Rossana Stanziola, head of chancery at the Embassy of Panama, joined the diplomatic tour for the second time with two other co-workers from her office and said she was leaving with a lingering feeling of sadness for not being able to stay longer.

Coming from a country with no direct flights from Korea, promoting Panama’s tourism industry is a real challenge, she said.

“We wish we could run a program like this but it won’t be easy because it takes 34 hours to get to Panama from Korea and tickets are expensive,” Stanziola said at a Manila airport while waiting for her flight back to Incheon. She held a bag that she said was full of “every kind of pearl,” all of which she had purchased from the Delma Pearl and Souvenir Shop in Puerto Princesa.

“The places we went to always had something to offer,” Stanziola added, “whether about science, flora, geography, marine life or animals. It inspired me with ideas about how to develop and promote [Panama’s] tourism.”

For more information about traveling to the Philippines, visit (in Korean) http://www.itsmorefuninthephilippines.co.kr/.