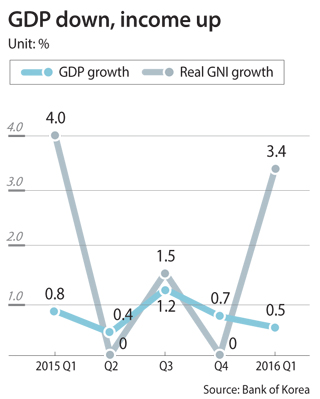 Despite a slight rise in incomes in the first three months of this year, investments fell amid the prolonged economic slowdown at home and abroad.

According to the Bank of Korea on Thursday, the country’s gross national income (GNI) adjusted for inflation grew 3.4 percent compared to the previous quarter. In the final quarter of 2015, the real GNI had zero percent growth. The nominal GNI rose 2.7 percent, making a turnaround from a 0.6 percent drop in the previous quarter.

Real GNI showed the highest rise since the first quarter of last year as trade conditions improved thanks to low oil prices, according to the report. The economic indicator is a gauge of consumers’ purchasing power. Overseas net incomes grew 1.4 trillion won ($1.2 billion) from the previous quarter.

Although the national income increased, the investment-to-disposable-income ratio of both households and businesses stood at 27.4 percent, the lowest since the second quarter of 2009. The savings ratio climbed 1.8 percentage points to 36.2 percent, indicating people are saving more than spending.

“Facilities investment slid 7.4 percent, mostly in mechanical and transport equipment,” said Kim Young-tai, director of the national accounts division at the Bank of Korea. “The number of new aircraft purchases declined in the first quarter, which affected the indicator.”

“Rather than interpreting the number negatively, it is desirable to think that such increase stems from the growing current account surplus,” Kim said.

The country’s current-account balance has been enjoying a surplus for 50 consecutive months. The surplus in April amounted to $3.37 billion.

The fourth largest economy in Asia grew 2.8 percent from January to March a year earlier.

The spending drop is partly due to a base effect of government-led policies to boost consumption in the fourth quarter, including a temporary tax cut on auto purchases, the BOK official said.

Korea’s exports fell 6 percent to $39.8 billion in May, the Ministry of Trade, Industry and Energy said. “Second-quarter figures are expected to improve as we had launches of new smartphones and extra holidays in May, which is positive for consumption,” Kim said.

“The rise in the real GNI will play a positive role in improving the Q2 figures, too.”