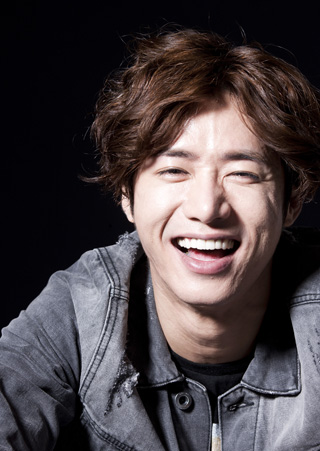 At the center of “Kill Me Now,” one of the hottest plays right now in the Daehangno theater district of Seoul is Oh Jong-hyuk, a former member of the K-pop boy group Click B.

The 33-year-old former idol singer has rebranded himself as a serious actor, and in this play, he portrays a man born with disabilities. The play shows how the man builds a relationship with his father despite his struggles as he goes into puberty, and even how he later becomes a caretaker for his father when he becomes sick.

“Kill Me Now,” which has brought many audience members to tears, has been garnering many standing ovations, and the critics credit Oh’s performance in the play for its success. The JoongAng Ilbo met recently with the actor to talk about his take on the production.

Q. What made you take on the challenge of this play?

A. My recklessness came out again. I just rushed into it after reading the script. I am [satisfied] when I challenge myself to my limits. The problem here was how to show the disability my character has. The script only gave me the idea that my character needs to be somehow disabled. It was all up to me to decide the details.

And I still had to deliver my lines clearly. That really helped me advance in my acting.

Do you think you understand plays, as this is your third time acting in one?

I made my debut with a play called “Pride” two years ago, after I was discharged from the military. It was one that went on for three hours, and I still sometimes sweat thinking about it.

I learned that I needed to use my own voice on stage only a day before the opening, but I had only done musicals before using microphones. I was blamed a lot, and that made me hold a [positive] grudge that I needed to do well. I was practicing every day alone, and I was the first one to go out on stage and practice making even my lower voice be heard from the opposite end of the theater.

You originally debuted as a member of an idol group. Why then have you moved to doing only musicals and plays?

Maybe I can say that the stage has saved me. I did my first musical in 2008. My face was well-known in the entertainment industry, but I was at my low point.

And then I started to do musicals and learned that those actors who have much more experience than I do get up to 80,000 won ($67) per show.

Even more shocking was how they were all so immersed in their characters. They spend 12 hours a day at the theater, working so actively and cheerfully by spiking the stage and studying the characters they play.

Until then, all I did was complain about the tight schedule of hitting one broadcast studio and then another and questioning why I needed to do certain things. There, I had to ask myself how pathetic I had been, what real art is and what kind of life I would lead.

Why did you think you were at a low point, and how did that help you become who you are now?

The group I was in was quickly disbanded after one of the members was caught driving while drunk in 2005. Then my business running a small pojang macha [outdoor pub] went bankrupt. I lost my home as well.

Then I started to think, I have a healthy body, so I shouldn’t be running away from reality. I started to sing at weddings to make money. Every morning, I woke up thinking that I was at my lowest point, so I should just try doing anything that I can.

I console myself and tell myself that thanks to such struggles back in the day, I work and act more like a real human being.