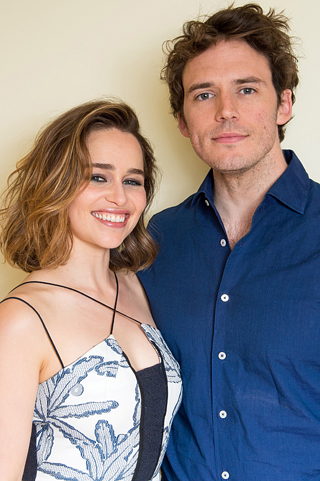 Actors Emilia Clarke, left, and Sam Claflin pose for a portrait to promote their film “Me Before You” in New York. The movie was released on Wednesday in Korea and is being released today in the United States. [AP/NEWSIS]

LOS ANGELES - As Emilia Clarke remembers it, she had a grenade launcher in her hand when her agent called about “Me Before You.”

To be fair, she was on the set of “Terminator Genisys” - not the most likely of places to curl up with a good tearjerker, but the timing was actually perfect. Clarke had gone from obscurity to starring as the conqueror Daenerys Targaryen in “Game of Thrones” before being cast as Sarah Connor in the failed “Terminator” reboot, so she was in the mood for something different.

“I read it in between takes in like two days,” Clarke said of Jojo Moyes’ best-selling novel before a recent Los Angeles fan screening of the film, which opens Friday. “I was like, ‘hush now, Arnold [Schwarzenegger]. I’m just going to go over here and cry like a little girl into my grenade launcher.’ I just felt so connected with Lou it was ridiculous. I understood who she was. It just felt like someone had got me down. And she’s got my surname!”

Moyes, who adapted her novel for the screen, raised an eyebrow when director Thea Sharrock mentioned that she was interested in the actress for the role of Lou Clark, knowing her only from “Game of Thrones.” In the book, Lou is an ordinary, happy-go-lucky, small-town girl whose life gets upended when she takes a sorely needed job working for a handsome, deeply depressed man, Will, who was recently paralyzed.

But Sharrock, a noted English theater director making her feature debut with “Me Before You,” had spotted something in Clarke - one of some 300 actresses she’d seen for the role - and her sparkling chemistry test with Sam Claflin solidified it.

Claflin and Clarke had a little bit of an advantage on this front. The two actors had met years before on a photo shoot when both were recent drama school grads who’d just scored their first big roles. They’d since been called in for a number of chemistry reads over the years, usually making sure to catch up over a beer after, but for various reasons, it hadn’t yet worked out. Perhaps it was worth the false starts, though - one of those would-be projects was “Jack the Giant Killer.”

“It was absolutely clear the second they were together that there was an instant respect and trust between them that was palpable. They just liked each other,” Sharrock said. “When I showed [Jojo] the tape of her and Sam she was in absolute floods of tears. That was the moment when she knew it was going to be OK.”

And then they were off in bringing this devastating and uplifting love story to the big screen with unusually supportive partners behind them in New Line and Metro-Goldwyn-Mayer Pictures. Warner Bros. even slotted the classic romance for a prime summer release, squashed between the sequels, superheroes, and ninja turtles.

“They knew what they had and they knew it was different from what everyone else was doing,” Sharrock said. “You have to really give them credit for believing in the story to such an extent that they stuck with it absolutely all the way. And they let me cast who I wanted to cast rather than the most famous people in the world.”

Sharrock wanted the film to feel like one huge breath.

“There’s a modern day Merchant Ivory quality to this. I wanted for it to look very smooth and accessible, but also to have almost a fairy tale quality. I mean, there’s a castle in the heart of this!” she said, referring to Will’s family’s expansive English estate.

She and her two leads made time for a few months of rehearsals prior to shooting to get the story and characters just right.

“I wanted to start out somewhere almost where you could feel the claustrophobia of her life or him in his annex to the journey of getting him outside and beyond that,” Sharrock said.

For Claflin, there was also the added challenge of having to play believable quadriplegic.

“I was constantly reminding myself not to move, not to comfort her with my body,” Claflin said. “This job had no end to its challenges for me. It was very physically demanding. I was always manipulating my body and contracting my neck muscles and shoulder muscles to try to make him look slimmer and a little more ill, and then at the same time holding my fingers in a specific way that I hope was doing the disability justice.”

Clarke had the opposite problem, and actually found herself starting to dress and act like Lou in real life. Sharrock even included a few takes in the final cut where Clarke says she was actually talking as herself and not as Lou. [AP]