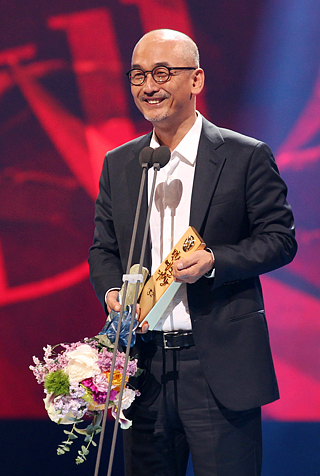 Lee Joon-ik, director of “The Throne” (2015) and “Dongju: The Portrait of a Poet” received the highest honor from the 52nd Baeksang Arts Awards held on Friday night. [ILGAN SPORTS]

The 52nd Baeksang Arts Awards was a festive event that shined a light on a wide scope of films, dramas and actors.

Baeksang, one of the country’s longest-running awards ceremonies, was held at Kyung Hee University, northern Seoul on Friday night and 27 directors, writers, actors and comedians were credited for their achievements.

The highest honor in the film section went to director Lee Joon-ik who released “The Throne” last year and “Dongju: The Portrait of a Poet” this year.

Films and dramas that were released or broadcast between last April and this April were automatically nominated for the awards.

“It’s so meaningful that I’m standing here with a film like ‘Dongju,’ which is a black-and-white, low-budget film,” said Lee, one of the big names in the country’s film scene.

Lee is a commercially successful director. His recent period film “The Throne,” attracted more than 6 million moviegoers but his next move was a small film, “Dongju,” an autobiographical movie about poet Yun Dong-ju (1917-45).

While the film was about Yun, it also spotlighted his friend and rival Song Mong-kyu, who is little known to the public.

“I want this film ‘Dongju’ to inspire young and beautiful people like Song Mong-kyu and other similar youths who lived in the era. I also hope this film would encourage today’s young people who are similar to Song.” 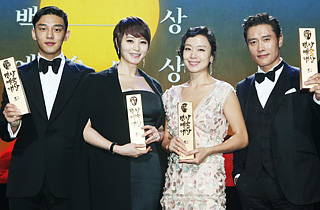 The grand prize at Baeksang usually goes to a film instead of a director but film critic Kim Bong-seok, one of the judges for the annual awards, told Ilgan Sports, an affiliate of the Korea JoongAng Daily, “We had many good films over the past year but none of them was excellent enough to be nominated for the top honor. We thought highly of Lee’s new attempt and challenging spirit. I would say Lee is enjoying his second heyday after the ‘King and the Clown.’”

Lee is best known for that 2005 hit film, which attracted more than 10 million viewers.

Actor Park Jung-min who played the role of Song in “Dongju” received the best newbie actor award, along with Park So-dam of “The Priests.”

Lee Byung-hun of “Inside Men” and Jeon Do-yeon of “The Shameless” both received best actor and best actress awards in the film section, too.

The grand prize in the TV section went to the drama series “Descendants of the Sun.”

Centering on a love story of a solider and a doctor who are both dispatched to a war-torn country, the drama earned a viewership rating of 38.8 percent in April.

With many people enjoying entertainment across various platforms including the Internet and smartphones, drama series these days rarely earn more than 15 percent of viewership so the popularity of “Descendants of the Sun” has been notable.

Song Hye-kyo and Song Joong-ki, the main protagonists of “Descendants of the Sun,” received the Star Century Popularity Award.

Other awardees in the TV section were Yoo Ah-in of the period drama series “Six Flying Dragons” and Kim Hye-soo of the criminal drama series “Signal.” They received best actor and actress awards.