More Koreans and Japanese hold off on marriage

More Koreans and Japanese hold off on marriage 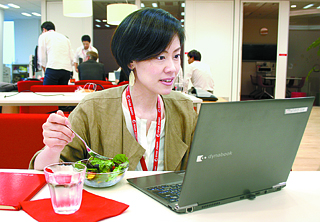 Motoko Ando, 42, has been working for 19 years and sees marriage as an option, not a must. [JOONGANG ILBO]

Since she began her career in 1998, Motoko Ando, 42, has dedicated herself to working day in and day out at the home shopping company Oak Lawn Marketing in Tokyo.

Although she was in a seven-year relationship in her 20s, Ando says she and her former partner eventually decided to part ways, as she was unwilling to put her work aside and start a family.

“If a man is okay with having no children, then I might consider getting married,” the career woman of 19 years said. “But I don’t think I will find such a man.”

Lee Mi-jin, 31, has a similar story. Lee works at the communication company Enzaim Health in Seoul, which specializes in the health industry. Like Ando, Lee is more focused on getting her work done and winning recognition in her field than finding a soulmate.

Raising a child is the last thing on her mind these days.

“Watching my sister raise a child, I realized having a child is a job that carries a tremendous amount of stress,” Lee said. “Being a working mom will inevitably make me lag behind others in my professional career.” 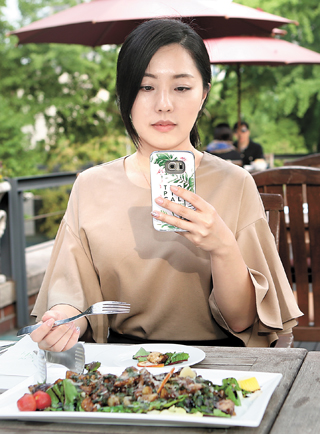 Lee Mi-jin, 31, has been working for nine years and is now at the communication company Enzaim Health. She says she is more focused on her work than finding a man to marry. [JOONGANG ILBO]

The two women epitomize a common trend found in the two countries, by which unmarried women don’t see marriage as a must-do but rather as an option.

In a joint survey by the JoongAng Ilbo in Seoul and Nihon Keizai Shimbun in Tokyo, more than half of the women from their 20s through their 40s said they viewed marriage as an option, not a must. The survey included 1,000 male and female respondents in Korea and 1,158 respondents in Japan, all within that age group.

Experts say the high number of women seeing marriage as an option or being outright opposed to it could be contributing to the countries’ low birthrates. Korea’s average birthrate per woman last year was 1.24, while Japan’s was 1.46.

While both nations share this problem, the reasons why differ.

The No. 1 reason for not having a child in Korea, cited by 27.2 percent of respondents, is a lack of balance between work and family. After this was economic uncertainty, cited by 25.8 percent, while 10.4 percent said late marriage is the culprit.

“Corporate culture in Korea makes overtime work customary, which only benefits men who have full-time housewives at home,” said Ku In-hoe, a professor of social welfare studies at Seoul National University (SNU). “Under such circumstances, it is not a viable option for women to balance their life between work and family.” 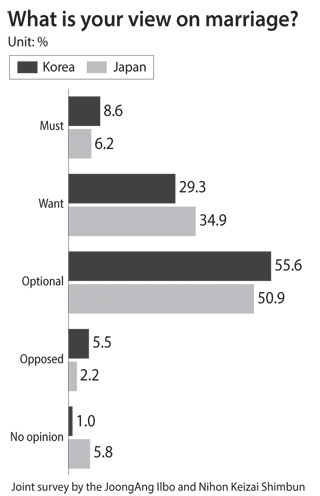 The survey of Koreans is also seen by experts as a sign of growing anxiety felt by young, unmarried Koreans over job security and economy uncertainty.

“In this survey of Koreans, more than half of male respondents in their 20s named job insecurity and the economic downturn as the driving force behind the drop in birthrates,” said Cho Sung-ho, researcher at the Korea Institute for Health and Social Policies. “For the government to address the low birthrate, it must create jobs for people in their 20s and ease the financial burden related to housing.”

While Korea and Japan have both been scrambling to raise their rock-bottom birthrates, more than half of respondents said they thought they should have children once they are married, with 64.2 percent of Korean respondents and 56.3 percent of Japanese respondents.

“Many young Koreans see raising a child as something they ought to do in marriage,” said Cho Young-tae, a professor at SNU’s Graduate School of Public Health. “But the economic reality is making it nearly impossible for them to wed in the first place.”

Pyeon Su-jin, a 30-year-old female Busan native, is among those young people giving up on marriage for the time being due to the lack of quality jobs.

Since graduating from college, Pyeon has been studying to take the civil service exam. For many Koreans in their 20s, government positions have become among the most sought-after jobs due to their employment security and generous pension benefits, regardless of how dull or repetitive bureaucratic jobs may be.

“I want to get married early, but I have no choice but to hold off since I’m not financially prepared,” Pyeon said.

She added that even if she passes the civil service exam this year, it would take at least four years to be prepared for marriage, as she would need to save enough money to pay for a lump-sum housing deposit, known as jeonse, which is returned to the tenant when their housing contract expires.

“I want to have two children,” she said, “which is an idea that I am not even sure can be realized in my lifetime.”