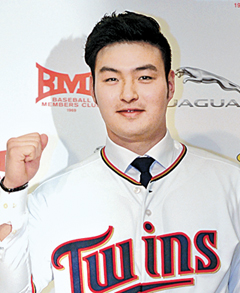 Park Byung-ho of the Minnesota Twins smashed his 10th home run in the Major League Baseball (MLB) on Monday, making him the fourth Korean to grab double-digit homers after Choi Hee-seop, Choo Shin-soo and Kang Jung-ho.

After 19 long games where he went dry, Park finally belted his 10th dinger on Monday against Tampa Bay Rays at Target Field in downtown Minneapolis, Minnesota. As a fourth batter for the team, Park’s solo home run in the third inning broke the tension in the otherwise even game and enabled the Twins to take the lead 2-1.

At an even count, Park blasted the third pitch by Rays starting pitcher Drew Smyly, who tossed a 74-mile-per-hour slider. Park sent the ball all the way to the upper deck of the left side of the ballpark.

The second Korean Major Leaguer to accomplish the act was Texas Rangers’ Choo Shin-soo. Playing for the Cleveland Indians in 2008, Choo cranked out 14 home runs. He went on to add 20 in 2009 and 22 in 2010 for the Indians.

The last before Park to accomplish the feat was Kang Jung-ho of the Pittsburgh Pirates, who powered 15 during his rookie season last year before an injury took him out for the remainder.

Despite Park’s effort, the Twins eventually gave out two runs in the ninth inning to lose the game to the Rays 7-5.

Elsewhere in the Majors on Monday, the Pirates’ Kang went 2-for-4 against the Los Angeles Angels, including a double, even though his team lost 5-4.

Kang batted fourth and played third base on Monday.

During his second at bat in the second inning, Kang collected two strikes and one foul with bases loaded before being hit by the pitcher, which brought home Chris Stewart.

Kang’s last at-bat in the ninth inning was his most notable, during which he hit a double to allow the runner on first to reach third. Kang reached second by sliding into the base.

Although the Pirates, who were behind by one run at 4-5, had a chance to flip the game around after Kang’s double, the double play by the Angels soon after left them with a loss.