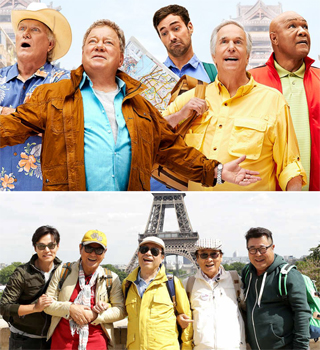 Four celebrities and a comedian host will be starring in “Better Late than Never,” the U.S. version of the Korean reality program “Grandpas Over Flowers” (inset). The show will begin airing on NBC on Aug. 23. [NBC, tvN]

“The Great British Bake Off” is currently one of the hottest TV programs in the United Kingdom.

The show is a baking competition involving ordinary citizens. The last episode of its sixth season was watched by more than 13 million people, recording the highest viewership record in the U.K. since the final match of the 2014 World Cup.

Rights to remake the popular cooking show have been sold in more than 20 countries, including Australia, Germany, Brazil and the United States. The remake is according to each country’s style, with different hosts and participants.

Similarly, the format of another British reality show, “The Great Sewing Bee,” a competition for amateur sewers, has been sold to six European countries.

“Following cooking, making crafts such as sewing, baking and pottery have become the center of the global format industry,” said the global format specialist, who last month attended the “2016 Global Format Development Workshop” hosted by the Ministry of Culture, Sports and Tourism and the Korea Creative Content Agency (Kocca).

Other TV format experts also attended the event to make suggestions. Michel Rodrigue, CEO and partner at The Format People Group, advised “not to solely focus on the Chinese market.” 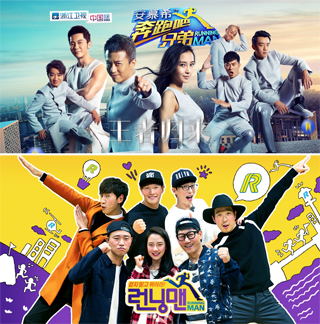 Within the TV entertainment industry, China is one of the fastest-growing markets, into which Korean formats have already advanced. According to Kocca, Korean formats rank fourth in China in terms of market share with 14.3 percent, after the United States (26.5 percent), the United Kingdom (20.4 percent) and the Netherlands (16.3 percent).

Despite the market’s attractiveness, Rodrigue noted that “a format that has been made to fit the Chinese market is difficult to be exported elsewhere, and therefore, [Korea] should think about another option in the long run.”

As for the Korean reality program “Grandpas Over Flowers,” the format of which was sold in the United States, where it will start airing in late August under the title “Better Late than Never,” Rodirigue said the U.S. version will be a stepping stone for Korean formats globally.

Justin Scroggie, CEO and partner at The Format People Group, explained how the British format market grew to make up 45 percent of the format industry.

In Britain, the broadcasting company gets 15 percent of the format’s profits, while the production company receives the remaining 85 percent, he said, adding that this was established as law 20 years ago.

The sale of formats, which allows buyers to localize TV programs, has become an important part of the broadcasting industry since the 1990s.