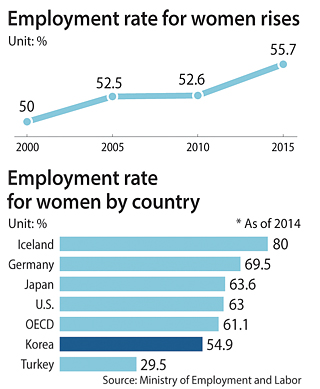 More women are working in Korea, but the gender gap lives on, largely due to the tendency of women to quit jobs to get married or have children.

According to the Ministry of Employment and Labor on Tuesday, the employment rate for females aged 15 to 64 rose from 50 percent in 2000 to 55.7 percent last year.

“However, the figure for women is still 20 percentage points lower than for men and lower than the average rate for 34 OECD countries, which was 61.1 percent as of 2014,” the ministry said in a report released Tuesday.

Women worked 4.6 years on average in their current jobs, much lower than 7.1 years for men.

More than 73.2 percent of women worked at companies with fewer than 30 employees, compared to only 66.4 percent for men.

The report showed that wages for working women have improved but are still lower than for men.

The report pointed out that the most significant factor for the gender gap in Korea is so-called career discontinuity, or the tendency of women to quit jobs to marry or have children.

“Many married women in their 30s to 50s choose to quit jobs,” the ministry said. “The employment rate for married men was higher than for unmarried men, while it was the other way around for females.”

According to the report, 36.9 percent of women said they quit jobs to get married. Some 29.9 percent quit to take care of children, while 24.4 percent quit because they were pregnant and about to give birth.

“Women have a hard time finding new jobs after they are ready to get back to work, and there aren’t many quality part-time or contract jobs that they can do while raising children,” the ministry said.

Meanwhile, the report shows that many women work in industries that pay relatively low salaries.

Some 16 percent of all female workers were employed in the retail industry, followed by health, welfare and hospitality.