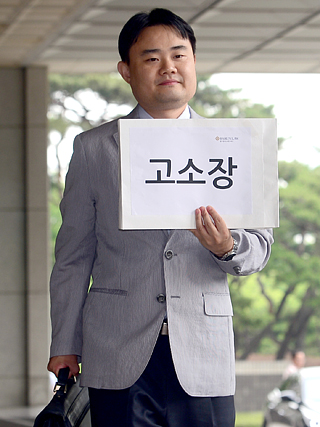 A lawyer from Barun Law enters the Seoul Central District Prosecutors’ Office on Tuesday with a complaint filed by Korean consumers who bought Volkswagen and Audi vehicles. Plaintiffs, claiming the automakers falsely advertised their diesel vehicles, are seeking a criminal investigation against a number of senior officials, including Volkswagen’s former CEO, Martin Winterkorn, and Andre Konsbruck, the former head of Audi Volkswagen Korea. [NEWSIS]

The Ministry of Environment officially announced its disapproval of all recall plans submitted by Volkswagen Korea on Tuesday, as the German automaker repeatedly refused to admit it tampered with emissions tests.

For the first two plans submitted in January and March, the ministry requested revisions rather than an entire rewrite.

But as the latest version handed in last Thursday was mostly identical to the prior versions, the ministry has decided to demand the automaker start from the beginning.

“The whole recall started because of the emissions rigging software, the so-called defeat device, but the automaker has refused to acknowledge that,” an official from the Environment Ministry said.

In the United States, however, the Environmental Protection Agency clearly states on its webpage that the automaker’s officials informed the agency on Nov. 19 that the defeat device existed in all of its U.S. 3.0-liter (0.8-gallon) diesel models since 2009.

It is believed Volkswagen is avoiding acknowledgement that it cheated on emissions test, as it could work against the company in court, according to industry sources.

The Environment Ministry said it cannot directly impose further legal penalties on the automaker but that it had filed criminal charges against Volkswagen Korea for violating emissions and certification standards for its cars, and also for disobeying the ministry’s recall order.

“As we have rejected the recall plan, we expect the prosecutors to further pressure the automaker,” said Hong Dong-gon, head of the traffic environment division of the ministry.

On the same day, the ministry ordered Nissan Korea to recall all 824 units of its diesel-powered Qashqai sports utility vehicle for cheating on emissions tests.

It also filed charges against Nissan Korea CEO Takehiko Kikuchi for violating articles 46 and 48 of the Clean Air Conservation Act, the same violation made by the German carmaker.

While the automaker claimed it was only to “protect the engine room from excessive heat,” the ministry found it to be intentional manipulation, saying “the preset temperature of 35 degrees is too low, as a normal car would reach that after 30 minutes of driving when the outside temperature is 20 degrees Celsius.”

Nissan Korea provided explanations that it did not intentionally cheat on emissions tests at a hearing on May 26, but its claims were denied.

Still, the automaker maintained that it had “complied with all existing regulations and did not use an ‘unjustified arbitrary setup’ or an illegal defeat device in the vehicle,” through a statement on Tuesday.