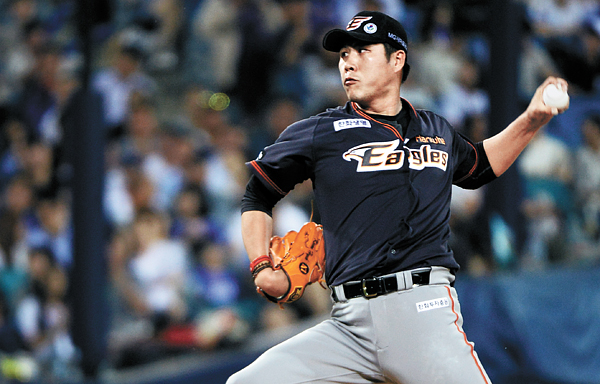 Hanwha Eagles reliever Kwon Hyuk has been solid on the mound for the Eagles, especially over the past 10 games. He has gone up against 71 batters as of Wednesday, conceding only 15 hits and no home runs. His earned run average during this period is a remarkably low 1.96. [NEWSIS]

Variety is proving to be more than just the spice of life for the Hanwha Eagles’ Kwon Hyuk, whose wide spectrum of pitches has made him an invaluable part of the team’s recent run.

The southpaw reliever was on the mound during a Korea Baseball Organization (KBO) game on June 5 against the Samsung Lions when, at the bottom of the sixth inning, the Eagles were behind 3-4.

Just like that, Kwon has cemented his position during the middle innings of ball games. Last week, the 33-year-old left-hander stood on the mound in four games to claim one win and one save. Going against 34 batters in 10 innings, Kwon only conceded three hits and three base-on-balls. His fastball, which maxes out at 147 kilometers per hour, as well as his curveballs and sliders have been Kwon’s pitches of choice, which he has used to strike out eight batters.

With Kwon throwing in the middle of its games, the Eagles last week got some upward momentum, winning five games while losing only one. As a result, Kwon was selected the MVP of the first week of June.

As of Tuesday, Kwon has played in 33 of the Eagles’ 54 games, recording two wins, one loss, six holds and three saves. As the key reliever for the Eagles, he has played more innings than any other on the team, protecting the mound for 46 and 2/3 innings this season. With the starting pitching lineup frailer than expected, Kwon has been throwing at least one inning per game. As the matter of fact, he pitched for less than one inning during only six of his 33 games this season. Last season, he played in the most innings among all relievers in the KBO with 112 under his belt, and he’s expected to break that number this time around.

To remain on the mound longer, Kwon decided to introduce some variation into his style of pitching. Instead of throwing never-ending fastballs, Kwon now tosses more breaking balls, like curveballs and sliders.

Kwon has always been known as the “two-pitch” pitcher. His trademark play was to pressure batters with a spray of fastballs and sliders, the two pitches that require the most power and strength. But it soon became evident for Kwon that as the number of pitches he would have to throw increased, he would grow exhausted more quickly. This not only slowed down the velocity of his balls, but his pitches also lost their sharpness and power, amplifying the chance a batter would be able to slug one off.

This was Kwon up until April.

In the 15 games Kwon pitched during April, he collected one win and four holds with a 3.32 earned run average. It wasn’t a bad performance, but 79.1 percent of the pitches he threw were fastballs and this certainly didn’t help Kwon stay on the mound for very long. In April, the average number of pitches Kwon threw was about 17.8, playing only about one inning per game.

But the Eagles needed Kwon to be on the mound longer. He dramatically increased his number of changeups, decreasing the percentage of fastballs he tossed to 66.7 percent in May. With sliders and curveballs here and there, the batters, who were familiar with Kwon’s old style of play, became confused and couldn’t get their timing right. As a result, the average number of balls Kwon tossed increased to 16.6, playing in about 1 and 2/3 innings per game in May. With Kwon on the mound longer, the closing lineup for the Eagles was able to go into the game fresher and more confident.

As the weather got warmer, the velocity of Kwon’s fastball also climbed - all the way up to near 150 kilometers per hour. Faster fastballs and the variety of changeups are having a synergistic effect, making it more difficult for batters to make contact off Kwon’s pitches. And now that Kwon has figured out the trick to his survival on the mound, he is expected to add even more strength to the Eagles relief lineup.

“I’ve always thought about tossing more changeups,” said Kwon. “It was a matter of confidence. Sometimes, I knew it was time to throw a changeup but I hesitated often when in a pinch. But, lately my control has improved and that made me confident about tossing more changeups. Of course, I am by no means completely satisfied. I am practicing my ball control whenever I get a chance so I can be more composed when I am on the mound.”