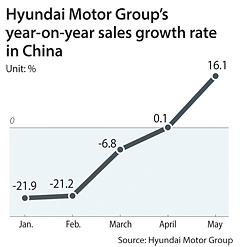 Hyundai Motor Group is getting a boost from the Chinese market.

Korea’s top automaker recorded its first double-digit year-on-year growth for 2016 in May, largely thanks to the soaring popularity of its sports utility vehicles (SUVs), which include Hyundai Motor’s Tucson and Kia Motors’ Sportage.

Hyundai and sister company Kia sold a total of 150,450 units last month, recording a 16.6 percent hike compared to the same period in 2015.

Kia only accounted for 33.3 percent of the vehicles sold, at 50,122 units. However, it was the company’s first positive growth rate in five months, at 2.3 percent year-on-year growth.

Hyundai Motor Group attributed the success to its strengthened marketing strategy for its SUVs, which is creating a boom in the international car market by emphasizing the models’ fuel efficiency and sleeker design.

Sales of Hyundai and Kia SUVs in May jumped 85.4 percent year on year, with 53,348 units sold. SUVs accounted for 35.5 percent of the sales of all models, marking a 13.2 percentage point increase compared to last year.

Kia’s new Sportage, one of the company’s most popular SUVs, sold 6,959 units to make it the third-most popular model after the flagship K2 and K3.

The all-new Tucson from Hyundai, which launched in China last summer, sold 14,528 units in May, becoming a steady seller for the group.

Hyundai Motor Group said it held some 500 local motor shows in order to increase its brand awareness among Chinese consumers.

Lingdong, a localized version of the Avante that launched in China in March, was also a big contributor to strengthening the group’s status in the competitive market.

The midsize compact sold 11,884 units in China and has been selling more than 10,000 vehicles in the market per month since its debut.

Hyundai Motor Group, which debuted in the Chinese market in 2002 as a latecomer, has been struggling to attract buyers against competitively priced local brands and other global names such as Volkswagen and General Motors, both of which entered the country earlier.

In January, the automaker posted minus-27.2 percent growth, followed by minus-28.1 percent in February.