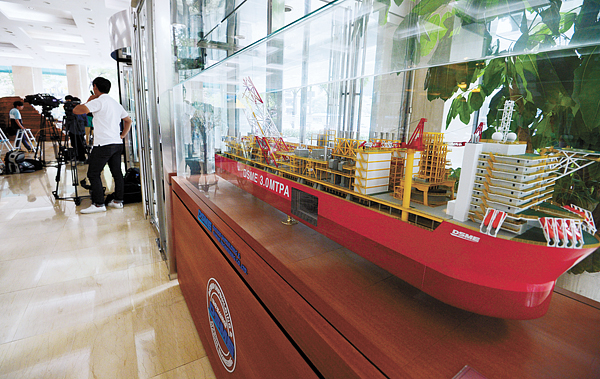 Prosecutors raided the offices of Daewoo Shipbuilding & Marine Engineering (DSME), including its headquarters in downtown Seoul and shipyards in Geoje, South Gyeongsang, on Wednesday, to confiscate accounting books, files and hard drives.

The investigation team was searching for evidence that would prove that the shipbuilder’s management intentionally manipulated its books to gain more loans from its creditors.

This was the first raid by a special investigation team under the prosecutor general that specializes in corruption cases. The team was first formed in January.

Some 150 prosecutors from the special team reportedly raided the shipbuilder’s offices at 8 a.m.

The seizure also included data and files stored at the homes of former and incumbent management of the shipbuilder, the company’s auditor Deloitte Korea and Korea Development Bank, the largest shareowner and main creditor.

“DSME has been managed as if it were a public company, as a large amount of public funds has been injected,” said an official from the prosecutors’ office. “As this is an issue that the public has huge interest in, we came to the conclusion that a through investigation is needed.”

Currently, both former CEOs of DSME, Nam Sang-tae and Ko Jae-ho, are banned from leaving the country.

It was previously reported that prosecutors have secured leads that prove the shipbuilder for years has manipulated its books.

The auditing committee of DSME in October last year and in January requested the prosecutors’ offices in Seoul and Changwon, South Gyeongsang, to investigate the company’s management. The probe was then picked up by the investigation team.

The accounting company omitted losses that the company suffered from its Songa Offshore project in Norway as well as the long-term trade receivables in the 2013 and 2014 balance sheet, figures that should have been included.

Meanwhile, a former chairwoman of Hanjin Shipping was summoned to the prosecutors’ office for allegedly minimizing her losses using insider information.

Choi Eun-young is accused of selling all of her shares in the shipping company, as well as those her daughters own, amounting to 970,000 shares worth about 27 trillion won, in April.

Two days after the sale, Hanjin Shipping announced it was applying for a self-rescue deal with creditors.