The nation’s troubled shipbuilders and shippers on Wednesday each released final versions of their self-rescue plans as the government announced restructuring measures.

Korea’s three major shipbuilders unveiled plans to bring in a total 10.2 trillion won ($8.6 billion) in capital for their business normalization by selling non-core assets and further downsizing their facilities and workforce.

Daewoo Shipbuilding & Marine Engineering (DSME) submitted a self-rescue plan worth 1.85 trillion won in October last year but handed in an additional plan Wednesday in preparation for a worst-case scenario.

The separate plan to scrap additional 3.5 trillion won includes slashing 30 percent of current labor costs, or some 1.3 trillion won, by 2020. It involves laying off 20 percent of the company’s workforce. The shipbuilder will also sell its 14 affiliated companies at home and abroad from 2017 to 2020 to secure 341.6 billion won. 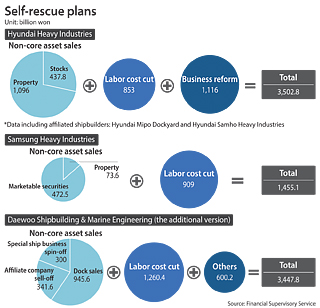 Other cuts include selling two of its seven floating docks and spinning off its special ship business division into an independent company.

Besides the second self-rescue plan DSME has also devised a contingency plan to secure 2 trillion won more in capital in case of unexpected risks.

“DSME is keeping to its self-rescue plan already submitted last October and we find the additional plans including the contingency plan to be complying with our demands,” Korea Development Bank, the main creditor bank of DSME, said in a statement.

HHI decided to sell three of its subsidiaries in the finance sector including Hi Investment & Securities and Hi Asset Management. It will also offload its non-core assets, including its holdings in Hyundai Motor and KCC and other shares in Hyundai Avancis, a thin-film solar battery maker, to secure 1,540 billion won. The company will gradually close dockyards and lay off workers. About 2,000 employees have already applied for voluntary retirement, according to industry sources Wednesday, with about 500 of them being workers at the production site. It is the first time HHI accepted voluntary retirement applications from non-office workers. It also devised a contingency plan that could secure up to 3.6 trillion won cash.

Samsung Heavy Industries laid out a 1.5 trillion won self-rescue plan to be completed by 2018. About 900 billion won in cost reductions will come from additional workforce and facility downsizing along with slashed costs from workers’ benefit packages. Another 550 billion won will come from asset sales, including Geoje Samsung Hotel and its human resources development center in Sancheong, South Gyeongsang. In addition, the company proposed to issue asset-backed securities or recapitalize depending on results of a consultation from Samjong KPMG accounting firm.

The need and amount of such measures will be confirmed when the consultation is completed by the end of June. The plan implies Samsung Group should be involved to save the troubled shipbuilder.

The nation’s major shippers are also busy with the normalization process and restructuring plans laid out for them by the government were centered on fulfilling three requirements asked by the creditors. The three requirements are to lower charter rates, adjust debt with individual bondholders and to join a global shipping alliance, in this case THE Alliance.

Hyundai Merchant Marine (HMM) is close to satisfying all three requirements, following five rounds of successful meetings with bondholders. Charter rate negotiations are expected to be finalized this week. Thus, the government will help the shipper join the global shipping alliance. Its creditors have already confirmed to adjust 1.39 trillion won worth of debt for the shipper through ways involving debt-equity swap worth 683.9 billion won and extension of its debt maturity at a discounted interest rate last month, though all processes will be terminated should the shipper fail to satisfy any of the requirements.

“If charter money negotiations are finished by this week, we will head with procedures to join the shipping alliance,” said a spokesman for HMM. “The initial reason for being rejected was due to other shipping companies’ concerns on our business stability but if charter rate negotiations are finalized it’s only a matter of time until our company is normalized since we already have support from our creditors.”

Hanjin Shipping will undergo the same process as HMM. However, the government pressured Hanjin Shipping to secure liquidity similar to Hyundai’s sale of affiliated Hyundai Securities to inject 1.2 trillion won for the shipper. Hanjin Shipping is now in negotiations with 22 ship owners.

The government also set mid- to long-term plans for new Chief Executive Officers and CFOs for the shippers.