Africa: a partner for joint success

Africa: a partner for joint success 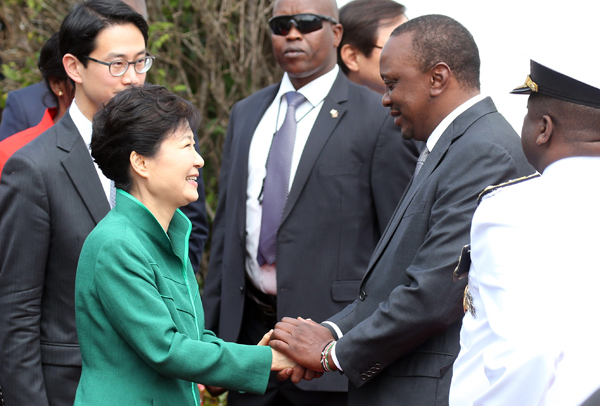 President Park Geun-hye shakes hands with Kenyan President Uhuru Kenyatta at a welcoming ceremony in the presidential palace in Nairobi on May 31. [KIM SEONG-RYONG]

Africa is a young continent. Through the international community’s efforts to reduce poverty and improve health and hygiene conditions via the Millennium Development Goals, its young population is rapidly increasing and young Africans are emerging as a new generation of consumers and producers. There are over 200 million Africans aged 15 to 24, and Africa is expected to provide half of the worldwide labor force’s increase in the next 25 years.

According to the OECD’s economic outlook, the African population is expected to more than double from 1.2 billion to 2.5 billion by 2050. In addition to job creation, the establishment of social security networks and public services, the improvement in public systems and various urbanization problems may pose challenges but will also present new opportunities.

Africa may seem far away, but it is only far to those who feel emotionally distant from it. You can fly from Seoul to any part of Africa in the same time it takes to reach New York or Washington, D.C. Korean products dominate more than half of the African smartphone market. Africa is already very close to us.

During her state visit to Ethiopia, Uganda and Kenya, President Park Geun-hye made the first visit to the African Union headquarters. In a special address, President Park emphasized that Korea is a partner in joint success for the new future of Africa. She proposed specific actions Korea will support in the course of executing Africa Agenda 2063.

First, Korea will share its development through two-way exchanges of 10,000 people and the establishment of technology innovation centers using Korea’s advanced information communications and science technology. The Better Life for Girls plan will assist in the education and health of African girls, and the experiences of the Saemaeul Movement will be shared to encourage confidence and a pioneering spirit.

Third, Park has pledged to cooperate with the international community to establish sustainable peace and stability in Africa. And last, systematic foundations connecting Korea and Africa will be enhanced, and Korea will faithfully play the role of a partner in these efforts to make Africa “the tree of life,” as the Ethiopian poet Tsegaye Gabre-Medhin once wrote.

While Park was touring Africa, the Korean government launched the Korea Aid program, a new development cooperation model. The project provides 10 vehicles that integrate medical, health, food and culture services to visit residents in remote villages and other isolated groups. While it has been criticized for being a showy event, locals seem to welcome the initiative.

We don’t need to follow the existing aid methods set by Western countries according to the OECD Development Cooperate Directorate.

Korea Aid provides mobility and integrated services and can be Korea’s original model. The Korea Aid program was held for two days, and hundreds of local people lined up at the vehicles. Expecting mothers were surprised and delighted to see the fetus in their wombs via sonogram for the first time.

It is important to establish solid partnerships with local medical, health, educational and cultural organizations. We should remember that even at this moment, many Koreans are quietly working to grow the trees of life in Africa.


*The author is president of the Korea International Cooperation Agency.