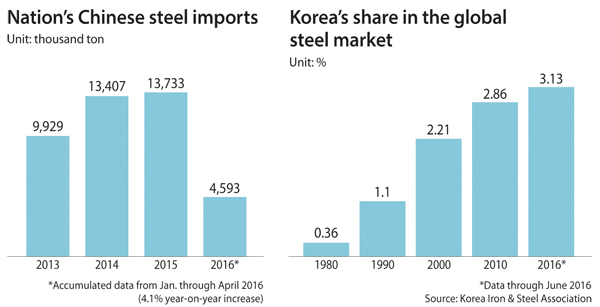 The nation’s steel industry has been growing rapidly to step up three rankings from the world’s ninth steel-producing country by volume 10 years ago to sixth this year.

However, as a supply glut and reduced demand depress the market, the industry is one of the nation’s five weakest sectors. According to association data, 700 million tons of steel are supplied globally, 10 times the production volume of Korea.

“The nation’s steel industry is on the verge of a new paradigm shift, and we need bold business reform to survive this era,” Kwon Oh-joon, CEO of Posco and chairman of the Korea Iron & Steel Association, said at a commemoration of the 17th Steel Day, an annual event of the nation’s steelmakers, on Thursday at Posco’s office in Gangnam District, southern Seoul.

To revive Korea’s steel industry, Kwon has sought overhauls to strengthen business management and protect the nation’s industry from low-cost, low-quality products in the Korean market. He also emphasized the need to develop world-class products and technology to compete among global steelmakers.

Such measures have been introduced elsewhere as recent oversupplies of steel, mainly led by China, have threatened other steel-making countries. The U.S. antidumping tariffs imposed this year on China to protect its industry have also hurt the nation’s steel providers. The duties are designed to punish dumping, or selling below cost to improperly gain market share.

The U.S. Department of Commerce imposed potential tariffs on Korea of up to 48 percent last month from a previous 3.5 percent cap. Hyundai Steel was most hit with 47.8 percent tariffs while Posco was charged with 31.7 percent and Dongkuk Steel Mill 8.75 percent. The rates are far less compared to anti-dumping duties of 210 percent imposed on Chinese producers, however, the hikes are expected to cause troubles in exports for the nation’s impacted steelmakers. Final decision of whether proposed tariffs will come into effect will be made by the International Trade Commission next month.

While China on Tuesday conformed to U.S. demands to cut its excess steel supplies during a two-day annual meeting on trade and security in Beijing, industry insiders say it will take some time until Beijing shrinks steel production.

Posco, the nation’s No. 1 steelmaker, already is restructuring its non-core businesses while Hyundai Steel is expanding by acquiring SPP Yulchon Energy and merging with Hyundai Hysco, a steelmaking affiliate under Hyundai Motor Group.

“The environment for the steel industry is changing, and I ask for the nation’s steelmakers to secure unique technologies that could effectively overcome trade restrictions imposed by other countries,” said Joo Hyung-Hwan, minister of trade, industry and energy, who also took part in the event. “The government will also aid the industry’s business reforms through regulatory easing, administrative process simplification and tax support systems.”

Korea is the world’s sixth-leading steel provider after China, Russia, Japan, the United States and Germany. The country’s presence in the world market has expanded to 3.13 percent in 2016 from 0.04 percent in 1970.