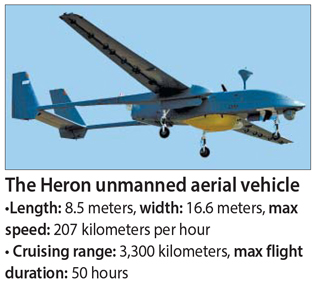 The South Korean military is testing Israeli unmanned aerial vehicles (UAV), or drones, to patrol the Yellow Sea, a high-ranking military official said on Thursday. They will be deployed in early August.

The military will deploy drones on the Northern Limit Line (NLL) and is planning to eventually form a UAV squad. The NLL, the de facto maritime border between the two Koreas in the Yellow Sea, has been breached frequently by North Korea, which doesn’t recognize it as a legitimate border.

The Heron drone is a product of Israel Aerospace Industries, Israel’s state-run aerospace and aviation manufacturer that produces high-tech aerial systems for both military and civilian usage. It is being adapted for Korean use.

A pioneer of unmanned vehicles, Israel Aerospace Industries products are used by many countries for national defense purposes.

“We are currently doing test runs of the drone in the skies of the western islands,” the official said on the condition of anonymity.

“We were originally planning to deploy a balloon with surveillance capability on Baengnyeong Island for vigilance against North Korean military movements, but it crashed several times during test runs,” another military official said. “Judging it to be inadequate, we decided to replace it with the Heron.” Military officials, for security reasons, did not disclose the number of drones so far adopted.

Equipped with an electro-optical camera and synthetic aperture radar, the Heron can make observations at night and from as high as 10 kilometers. Controlled remotely, it can conduct close surveillance on areas.