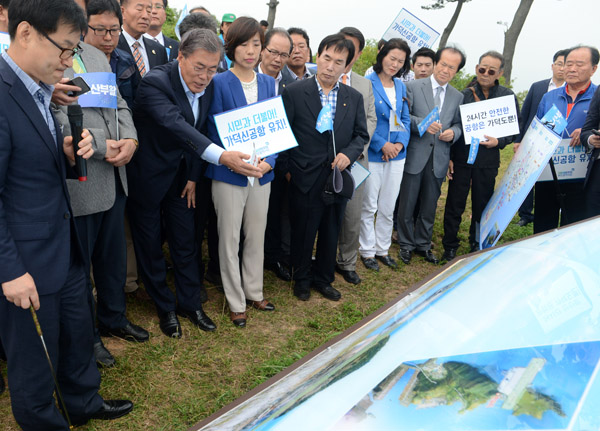 The impending government decision on where to build a new airport in the Yeongnam region has rekindled decades-old political conflict between Daegu and Busan.

Yeongnam, which includes Busan, Daegu and North and South Gyeongsang, has five airports. But with increasing air traffic, especially at Gimhae Airport in Busan, it has become imperative for the government to deliver a swift decision regarding if and where it will build a new airport. The Ministry of Land, Infrastructure and Transport will likely release its report by the end of the month.

“If the government report comes off as unfair in any way, we will not go quietly,” Busan Mayor Suh Byung-soo said in a consultative meeting with Saenuri Party lawmakers on Wednesday. “I cannot help but suspect that the decision may be heavily influenced by invisible political forces.”

Busan and South Gyeongsang forces are calling for the new airport to be built on Busan’s Gadeok Island, where they say the airport can be run 24 hours a day and can help divert air traffic from Gimhae airport. Daegu and North Gyeongsang officials are pushing for Miryang of South Gyeongsang as the ideal spot as it is equidistant from Daegu, Busan and Ulsan.

“Since Busan broke the agreement that was reached last January between five heads of city and provincial governments of the Yeongnam region to not engage in any competitive activities to host the new airport,” said the Lee Soo-san, secretary general of the committee, “we can’t just sit on our hands.”

The Infrastructure Ministry has requested a French airport design firm, ADPI, to provide a feasibility report on building a new airport in the Yeongnam region.

But the ministry has not revealed the assessment criteria of the report for fear of a political backlash.

The airport issue was not fraught with politics when it was proposed by then-President Roh Moo-hyun in 2006.

Things started to unravel in 2010 when regional politics continued to divide parties within the new airport committee, established under the Ministry of Land, Transport and Maritime Affairs (now defunct and part of the Infrastructure Ministry).

The discussions came to an end in March 2011 when the Maritime Ministry decided not to pursue the feasibility study, saying that neither Miryang nor Gadeok Island are suitable locations given the tremendous finances that would be needed.

But calls for a new airport in the Yeongnam region never faded. When the mayors of Miryang and Daegu were elected in 2010, they both promised to see a new airport established in Miryang. When President Park Geun-hye and Moon Jae-in ran for presidency in 2012, they too put forward the new airport issue. And Moon has not given up. Visiting Gadeok Island on Thursday, he told residents their wish “will come true.”

Moon had previously promised that if Busan helped the Minjoo Party win five seats in the National Assembly, the new airport construction in Gadeok Island begins within Park’s term. Five Minjoo lawmakers based in Busan have been elected this year.