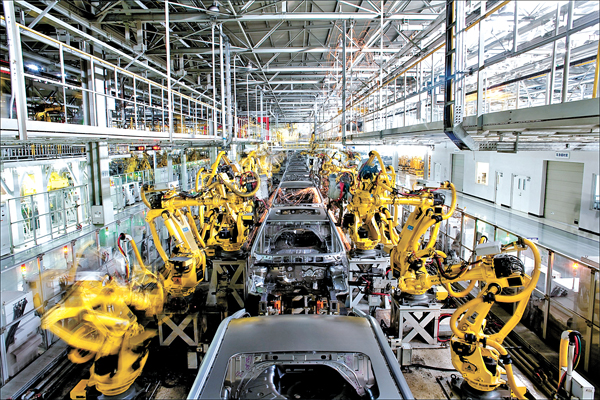 The production line at a Hyundai Motor plant. The manufacturing industry has been the major driving force of Korea’s economy for decades. However, it has reached its limits, and market experts are raising the need for structural changes. [JOONGANG ILBO]

The central bank’s rate cut to a record low last week surprised many market experts who thought no such action would be taken for at least another month, especially with a U.S. Federal Reserve meeting to take place later this week and the United Kingdom to decide on June 23 whether to exit the European Union.

Now, experts are comparing the situation to the 1998 International Monetary Fund (IMF) crisis and are blaming Korea’s slow growth on its reluctance to change with the times.

A survey by the Korea Financial Investment Association, released a day before the central bank held its monetary policy committee meeting on Thursday, showed that 79.4 percent of the surveyed 102 bond market experts projected the Bank of Korea (BOK) would freeze the key interest rate at 1.5 percent for 12 consecutive months.

But there were already signs of a growing consensus that a rate cut was imminent, as the interest rates on Korean treasury bonds fell below the previous 1.5 percent key rate on Wednesday.

The interest rate on three-year maturity bonds was trading at 1.38 percent, below the benchmark rate. The rate on the same bond in April fell below the key rate to 1.45 percent and further fell in May 9 to 1.41 percent, although by the end of last month, it recovered to 1.5 percent.

The recent drop indicates investors are purchasing bonds with the expectation that the BOK will likely further loosen the monetary policy rate.

In fact, in just one month, 1.23 trillion won ($1 billion) was invested in bond funds, and in the week leading up to Tuesday, two days before the monetary policy committee meeting, 369.3 billion won purchased. Since the beginning of the year, 4.16 trillion won in investments have been injected into the bond market, a stark contrast to the 2.33 trillion won that was pulled out of equity funds.

Speculation that the BOK might make a rate cut in July started building this month when Janet Yellen, the U.S. Federal Reserve chair, hinted at the possibility of the Fed raising its interest rates on the grounds of “considerable uncertainty about the economic outlook,” at the World Affairs Council of Philadelphia.

This was a turnaround from her position 10 days ago, when she mentioned that the interest rate hike might happen in the coming months. The change of heart came after the U.S. jobs report in June turned out to be disappointing.

The delay of the U.S. interest rate hike gave room for the Korean central bank to make an additional adjustment.

“[The rate] cut was not a complete surprise,” Joseph Incalcaterra, an economist at HSBC, said in a statement released on Thursday. “Markets had been pricing in a cut over the short term, given pressures to growth from weak exports and the government’s corporate restructuring plans.


“Indeed, we had expected the BOK to cut in July as a palliative measure to pre-empt the negative impact restructuring will have on employment and consumption.”

The move was interpreted as a pre-emptive measure to prevent the economy from falling further, especially since the restructuring of the shipping and shipbuilding industries, which will include massive layoffs, starts in the second half.

“There are concerns about downward risks in the economy, considering slowing growth in global trade and the ripple effects of corporate restructuring,” BOK Gov. Lee Ju-yeol said. “The board concluded that pre-emptive actions are needed.”

He added that “the Korean economy shows no clear trend of improvement in domestic demand while sustaining a slump in exports. The growth trend is hovering below the BOK’s April forecast.”

So how bad is the situation? Some market experts believe the current situation is comparable to the IMF crisis of the late 1990s.

Although the 2008 global financial crisis had a huge impact on the Korean economy, dragging its growth below 1 percent, rapid stimulus measures by the Lee Myung-bak administration made for a quick recovery.

“Korea faces a type of stagnation that we have never experienced before,” said Ju Won, a senior researcher at Hyundai Research Institute. “Although there is no major external impact on the economy, it is taking a long time for it to recover and so exhaustion is building up, dynamism is drying up and hopes for the future are withering.”

Production growth in Korea’s manufacturing industry has, in fact, been on a decline for six consecutive quarters. The only time it has declined for more than three consecutive months was during the IMF crisis of 1998 and the 2008 global financial crisis, and it only lasted four quarters in 1998 and three quarters from 2008 to 2009.

Making matters worse, the manufacturing industry’s inventory has been increasing, while overall product shipments have been falling.

In fact, in the first quarter, the average operation of Korean production plants was 73.6 percent of capacity. It has been falling since the first quarter of 2011, which was at 81.3 percent.

“The current problem of Korea’s manufacturing industry is not intense stagnation but rather the prolonged sluggishness of demand in the market,” Ju said. “Because of this, many major manufacturing sectors are facing their limits.” 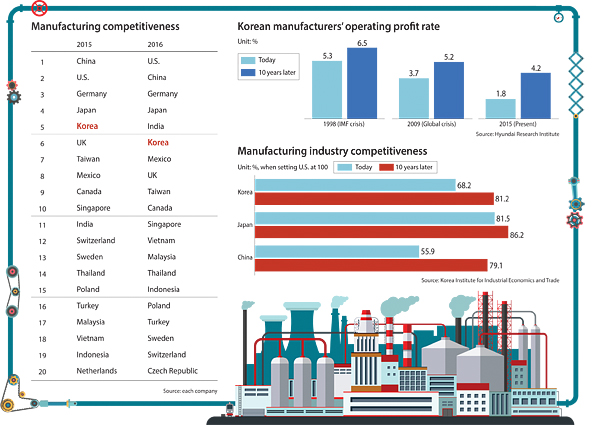 In a report released earlier this month, the state-run think tank Korea Development Institute noted that the manufacturing industry, which has for decades been the driving force behind Korea’s rapid economic ascension, is now holding back the economy, primarily due to exports, which have been on a 17-month decline.

Market experts blame the current predicament on a failure to quickly change the economic structure, which has been heavily dependent on the manufacturing industry and exports.

The researcher at the LG think tank also noted Korea’s heavy dependence on the manufacturing sector.

“Especially in the manufacturing industry, the reliance on electronics, transportation equipment and machinery is higher than in other countries,” Lee said. “These are areas that need huge investment and so the performance of these areas fluctuates wildly accordingly to the economic situation, and so when one of these sectors flounders, it can harm the overall economy.”

The manufacturing industry’s average contribution to the economy was 21.8 percent in the 1970s, according to the LG institute’s research, but in the 2010s, it rose to 30.6 percent, one of the highest in the world.

The reliance on electronics in the manufacturing sector has gone up from 17 percent in the 1990s to 26.2 percent in the 2010s, and that goes up to more than half if transportation equipment and the chemical industry are included.

That makes Korea the eighth-highest ranking country among nations in which the manufacturing industry is heavily concentrated in three areas. The top-ranked country is Iceland, where beverages, metal and machinery contribute to 74.2 percent of the manufacturing industry, while Ireland comes in second with pharmaceuticals, beverages and electronics accounting for 71.4 percent.

In Taiwan, which ranks third, 60.5 percent of the manufacturing industry comes from electric power, electronics, chemicals and metals.

The frozen industrial structure is also affecting the profitability of Korean companies.

According to a study by Hyundai Research Institute, the average operating profit rate of Korean manufacturers fell from 3.7 percent in 2009 to 1.8 percent as of 2015. The median operating rate, which is less affected by unexpected variables, has also declined from 5.2 percent in 2009 to 4.2 percent last year.

Already there are projections that the global competitiveness of Korea’s manufacturing industry will soon begin to falter.

A study by Deloitte released late last year shows that Korea’s manufacturing competitiveness ranked fifth after China, the United States, Germany and Japan. Korea’s competitiveness is expected to fall to sixth by 2020, pushed back by India, which as of 2015 ranked 11th.

When it comes to future manufacturing competitiveness, which includes the four major areas - smart cars, the Internet of Things, convergence composite materials and health care - Korea is 68.3 percent that of the United States, according to the Korea Institute for Industrial Economics and Trade, while Japan is at 81.5 percent and China is at 55.9 percent.

Industry experts say the Korean government should not try to lead in creating new industries as it has done in the past, but rather concentrate on supporting existing industries through various means such as deregulation that would allow market participants to create new businesses.

The global competition with major economies like China is expected to be fierce. Last year, the Chinese government announced its 2025 vision, for which it has selected 10 future businesses, including next-generation information technology, new materials and biopharmaceuticals, and promised full support.

Market experts say it is crucial for companies to secure talent and continue to increase their investment in research and development.

“In the case of Korea and northern Europe, both price competition and labor productivity have been weakening,” said Lee of LG Economic Research Institute.