[At Home with Her Excellency, Finland] An expression of Finnish functionality

[At Home with Her Excellency, Finland] An expression of Finnish functionality 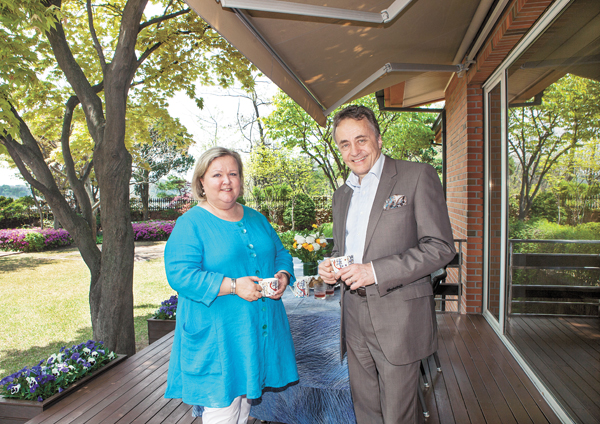 Finnish Ambassador to Korea Matti Heimonen, right, and his wife, Hilkka, pose in their backyard during an exclusive residence tour with the Korea JoongAng Daily. [PARK SANG-MOON]

At the Finnish ambassador’s residence, the small details make the space. From the intricate glassware to delicate paper curtains, the Nordic nation is well regarded for its world-renowned designers of housewares big and small.

And sometimes, it’s the details that can get overwhelming, so much so that Finnish Ambassador to Korea Matti Heimonen occasionally keeps a small list in his pocket of designers’ names in case he ever gets lost recalling them during conversations.

“I had a natural interest in interior design, but not as much as madam,” Heimonen admits with a laugh. “She’s always on a search for the unusual.” His wife Hilkka Heimonen has served as an executive director of the Finnish Sauna Society and secretary general of the International Sauna Association. She has an unparalleled love for Finland’s sauna culture, saying the facility is a “must” for all Finnish homes, including their own.

A. Our residence is located in Seongbuk-dong in Seongbuk District, northeastern Seoul, where we have about 40 other ambassadors as neighbors. When we look out our windows, we’re able to see a beautiful scenery of Seoul, and my personal favorite place, the Korean Furniture Museum.

The Finnish Ministry of Foreign Affairs purchased the house in 1996, and since then, five Finnish ambassadors have lived here. We moved in almost four years ago. We have our private quarters upstairs and use the ground-level area as a public space. In the basement, we have our sauna and other facilities.

Right after we moved in, we started refurnishing the interior. An interior designer was dispatched by our government, who made decorative designs for the house, but in terms of redesigning the kitchen, sauna and bathrooms, I was very much involved with all practicalities.

The renovation was done little by little, starting with the reception hall’s ceiling. Now that the house is finally ready, we have to move back to Finland because my husband’s term is nearing its end. Luckily, we’ve already had some time to enjoy the results of the renovation.

Now I love the house, which is full of Finnish furniture, art and home decoration objects like Iittala glassware and Marimekko fabrics. Nowadays, we can find more Finnish brands in Korea, like Marja Kurki and Finlayson. Other Finnish brands like Magisso, Verso Design, Vallila and Lapuan Kankurit will be sold in the new Nordic home deco shop, set to be opened in August at Lotte Department Store in Gangnam District, southern Seoul.

In Finland, we’ve just moved to a flat in downtown Helsinki. I like the comfort of living in an apartment without any worries about the garden or the house itself. And being able to walk to the city’s center is also very essential for me.

What makes your house Finnish?

One commonality in all Finnish houses these days is the simplicity and functionality of Finnish design. Finnish houses are well insulated, so they are warm even during harsh winters. And in any case, we can’t imagine a house without a sauna.

There’s a long history surrounding Finnish sauna culture, and some say it was even invented in our country. Every family has a sauna as a means to keep clean. In the old days, it was even a place to give birth because it was clean and warm.

But still today, it’s a definite must for a Finnish family to have a sauna.

While people of all ages enjoy this culture, I personally think men tend to spend more time in saunas than women because they use it for social purposes, while females stick with functionality.

Many Korean ambassadors to Finland have joined the Finnish Sauna Society, where I previously worked as executive director. What’s amazing is that when people are in a sauna together, they leave all their titles behind. We chat like equal people, and it doesn’t really matter whether you were the former president.

Have you personally been to a Korean sauna?

Not me, but my husband has. He found some key differences, like how Korean saunas don’t have stones inside, where users can pour water on top and adjust the room’s humidity. The heating system is quite different. The essence of Finnish saunas lies in the steam.

I personally love objects that tell a story - things that spark my imagination. There’s a table lamp near our entrance titled “Aarre” and designed by Kirsti Taiviola. It was purchased by the Finnish government, and I like it because it’s like a magic lamp that features an interesting reflection on the ceiling.

Then there’s another lamp in our living room made out of paper, a standing piece titled “Tollo” and designed by Ilkka Suppanen. In Finnish, the word means a piece of paper crushed into a ball as if to throw it away. It always raises questions among our visitors, and some say they feel like sitting under a palm tree.

Finland is a major producer of paper, and the material is often used in furniture, too, like for our curtains.

Lastly, there’s the hanging chair made out of wood and leather, called “Jiella” and designed by Samuli Naamanka. Almost all our guests want to try sitting on it.

I see a large bird on the front lawn.

Designed by Eero Aarnio, who is also famous for the “Ball Chair,” the bird is titled “Paloma” and can be found all over the world. Here, it lights up our garden at night.

In Seoul, I have seen them a couple of times in front of local restaurants, too. My husband is very fond of the object because it has beautiful glow.

Is there any etiquette that a host in your country would adhere to for having guests over their house?

We usually ask first whether the visitor had eaten, or at least whether he or she would like to have a cup of coffee. We love coffee. Finnish people are known to be heavy coffee drinkers. With coffee, we often have cinnamon rolls called korvapuusti.

For some of our readers interested in visiting Finland, do you have any recommendations?

Visit a good sauna and go to a forest. In southern Helsinki, there is a new public sauna named “Loyly” in Hernesaari. Or you can visit the old Kotiharjun Sauna in Kallio, a traditional district in Helsinki.

To experience Finnish wild forests, visit the Nuuksio National Park or the Finish Nature Center Haltia, half an hour from downtown Helsinki.

An easy and practical way to visit Finland is by using the Stopover in Finland program run by Finnair and Visit Finland, through which users are introduced to a variety of fun activities in the country for up to five days.

Left: A look inside the couple’s home in Seongbuk District, northern Seoul, which features a wide collection of Finnish housewares by world-renowned designers including Alvar Aalto, Harri Koskinen, Ilkka Suppanen and Samuli Naamanka. The house has been renovated little by little since 2012, when they first arrived in Korea. Center: A Finnish sauna is located in the basement floor of the house, where the couple relaxes at least once a week in the steam room. Right: A large bird sculpture designed by Eero Aarnio sits at one corner of the garden. The top envoy says it is one of his favorite objects in their residence because of its “beautiful glow” at night. [PARK SANG-MOON]