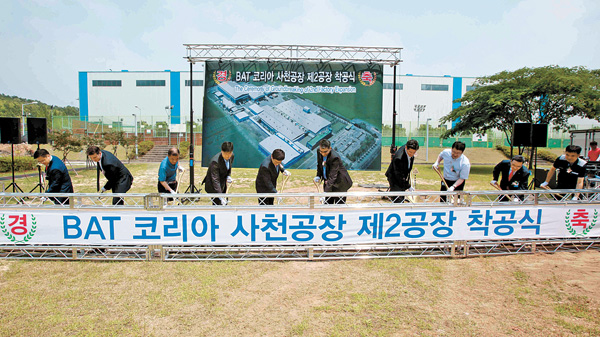 BAT Korea holds a ground-breaking ceremony on Friday for its second plant scheduled for completion next January in Sacheon, South Gyeongsang. [BAT KOREA]

SACHEON, South Gyeongsang - British American Tobacco (BAT) is spending $86 million to build a second factory in Korea, which the British cigarette manufacturer hopes will further boost its exports when completed next January.

The investment comes after the company best known for the Dunhill brand built its first plant in 2002 on the same plot of land here in Sacheon, around 120 kilometers (74.5 miles) northwest of Busan.

The second factory will double BAT Korea’s annual production volume from 16.8 billion cigarettes as of 2015 to 35 billion in 2017. It will also boost the ratio of exports from the current 43 percent of total production to as much as 70 percent.

“We expect the second plant to play an important role in making our factory an ‘Export Hub of Asia’ leading the global market,” Lee Seong-kwon, BAT Korea’s operations director, told reporters at the ground-breaking ceremony for the second factory on Friday.

BAT currently exports to 13 countries, but that number is set to increase with the new factory. The list of countries has yet to be confirmed. Of total exports by volume, 83 percent go to Japan, 12 percent to Taiwan and the rest to countries like Hong Kong, Singapore and Uruguay.

The company noted that the new factory will create 100 new jobs that will mostly go to locals, and will also solidify partnerships with raw material suppliers in the region. Almost 90 percent of the current 360 workers at the first factory come from Sacheon and its neighboring area.

That first factory is one of 44 across 41 countries.

When reporters pointed out that BAT donates a smaller portion of its revenue than other similarly sized multinationals in Korea, Kwak Sang-hee, the company’s legal and external affairs corporate external affairs manager, vowed to ramp up efforts in the near future.