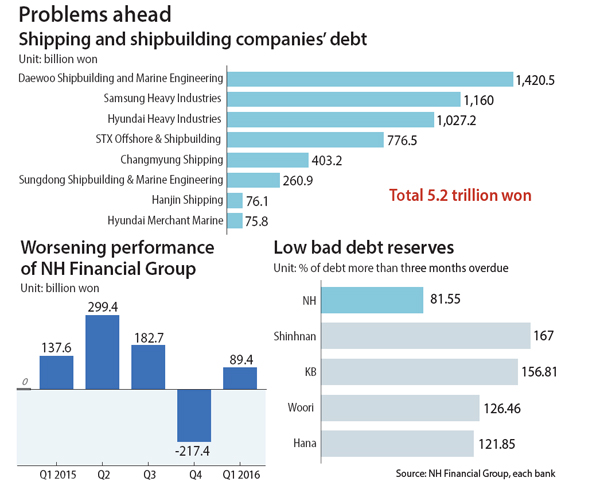 NH Financial Group is facing big problems with the restructuring of the shipping and shipbuilding industries.

The financial arm of Korea’s largest agricultural cooperative federation is facing massive losses after it failed to reduce their lending to the industries, unlike other commercial banks.

Worse, it is not eligible for government bailouts, unlike the state-run Korea Development Bank and Export-Import Bank of Korea.

NH Financial Group is hoping to write off the bad debt it has lent to shipping and shipbuilding companies, but it is unclear whether that will be approved by its board of directors at the National Agricultural Cooperative Federation, also known as Nonghyup.

According to the group, its public relations and education departments will undergo their own restructuring starting next month.

“Additional reforms in the organization will take place at the end of this year,” an official at the group said.

NH Financial Group’s decision to tighten its belt comes as it has lent over 5.2 trillion won ($4.4 billion) to the troubled shipping and shipbuilding industries.

In the first quarter alone, the financial group’s net profits fell 35 percent year on year, after it set aside 300 billion won in bad debt reserves in response to Changmyung Shipping filing for court receivership.

In the second quarter, the group set aside 650 billion won in reserves to cover STX Offshore and Shipbuilding, which recently filed for court receivership.

In 2010 and 2011, NH Financial Group increased its loans to the shipping and shipbuilding industries. This was before the agricultural cooperative spun off its financial department as a separate entity.

Even after the financial group was spun off in 2012, instead of reducing its loans to shipping companies and shipbuilders like other commercial banks, NH Financial Group expanded its lending.

“As we have a stronger public role than other commercial banks, we weren’t able to reel in the debts as early as we should,” an NH Nonghyup Bank official said.

The group is more vulnerable to the insolvency of the shipping and shipbuilding industries because of its smaller bad debt reserves. While many commercial banks have reserves exceeding 100 percent of all debt more than three months overdue, NH Nonghyup Bank’s reserves are only 81.55 percent of its overdue debt because they failed to prepare for a crisis.

The government and central bank have agreed to give up to 12 trillion won to state-run banks for the restructuring, but NH is not subject to such help.

For these reasons, NH Financial Group Chairman Kim Yong-hwan suggested the bank take a “big bath,” writing off a large amount of bad loans sooner rather than later

“Even if we suffer losses, we need to write off the insolvency once and for all,” Chairman Kim said.

It is unclear when that write-off will take place or how much it will be, but analysts estimate it to be roughly 2 trillion won.

But trying to convince the cooperative federation’s board of directors to take the big bath won’t be easy.

Big losses would mean that the cooperative federation will not be able to receive dividends from its financial group, which it uses to invest in regional cooperatives.

Eighteen of the 30 members on the board of directors are executives at regional cooperatives, which means there will be strong opposition to the big bath.

“Not able to deliver dividends is out of the question, especially when farmers are struggling,” said a cooperative member whose four-year term starts in July.

“The financial holding company should be 100 percent responsible for dividend payments, even if they have to suspend the salaries of their own employees.”

Another board member said he would vehemently protest if the issue of the big bath is brought up at the board of directors meeting.

“The resources used to build up bad debt reserves should come out of the bank’s own pocket through normalization,” the board member said.

There are some who argue that the financial group needs to improve the transparency of its governance structure, particularly since nearly 75 percent of its outside directors are former bureaucrats. This has meant the financial group has been strongly influenced by the government.

“Under the current situation, there are no other choices but to cut back on dividends that will be given to the smaller regional cooperatives,” said Moon Jong-jin, a professor of economics at Myongji University.

“This should be an opportunity for the smaller cooperative to enhance its power as the owner of NH Financial Group and to strengthen its oversight of management.”