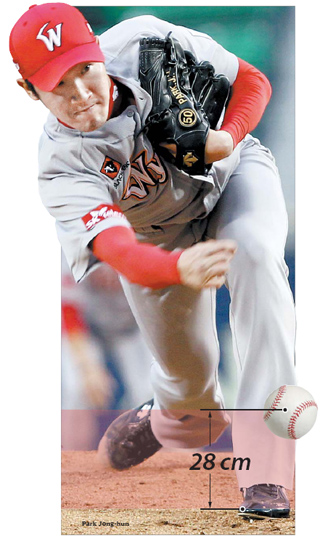 Can the “submarine” Park Jong-hun of the SK Wyverns intrigue enough Major League scouts to take a leap from the Korea Baseball Organization (KBO) to the big league in the near future?

Without a doubt, the majority of the big league scouts spotted at the Munhak Baseball Stadium gather to watch southpaw Kim Kwang-hyun, the ace of the Wyverns who will be a free agent after this season. Kim is going to be the one of the hottest players in the market during the coming transfer window. Kim himself is determined to try his luck in the United States. After all, his compatriots such as Oh Seung-hwan of the St. Louis Cardinals and Ryu Hyun-jin of the Los Angeles Dodgers have been making their mark in the big league.

However, Kim is not the only player that piqued the interest of the Major League scouts. Agents from overseas have spotted Park tossing underhand and his throwing form prompted some of them to deem Park as “possibly the most interesting pitcher if anyone [from KBO] was to be posted right now.”

The 24-year-old has yet to pitch against Major League batters. But, his performance against foreign batters in the KBO could provide a general idea on how Park may do against the big league hitters.

Park’s batting average against (AVG), a measurement in baseball that shows a pitcher’s ability to prevent hits, against foreign hitters is .176. This is almost 10 percent lower than his season AVG, which stands at .263 as of Monday. Granted, Park has pitched against foreign batters in only 17 at-bats. But, given that most foreign players are the key batters for their respective teams, the number is not something to take lightly. 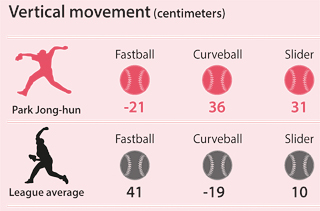 Park has had ups and downs in his career, but rarely has he allowed a foreign player get away with hits. Luis Jimenez of the LG Twins is the only batter that went 2-for-4 against Park this year. Other than Jimenez, the rest of the foreign batters that faced Park have struggled to make contact. Park’s AVG against those other than Jimenez stands low at .076. Things were not so different last year, during which he collected .205 AVG against foreigners. Even Eric Thames, the three-time league MVP from the NC Dinos, had trouble against Park and went 0-for-4 while striking out twice.

Park is a rare talent in the KBO when it comes to style of pitching. He is considered an authentic submariner who releases the ball underhand barely above the ground. His dropping motion is so extreme that he often scrapes the ground with his knuckles. According to the Athlete Media, a company that operates a system that measures and tracks baseball data with radar called TrackMan, Park’s release point this year is only about 28 centimeters (11 inches) above the ground. This measurement is half of Kim Dae-woo of Samsung Lions, who is listed second in release point at 59 centimeters. Kwon Oh-joon, a sidewinder from the Lions, releases his pitches 120 centimeters above the ground.

Foreign players uniformly describe Park’s pitch as “unfamiliar.” Now retired Andrew Brown who played alongside Park last season said, “It’s difficult to find a pitcher such as Park even in the United States. His delivery is very efficient.”

Thames also selected Park as the most difficult pitcher to deal with, recounting his pitch as “never seen before and difficult to adjust to.”

The Major League dubs underhand pitchers such as Park “submariners.” At the moment, however, one can hardly see any authentic “submariners” like Park in the big league. Chad Bradford, who retired in 2009, was one of the last of MLB pitchers to be acclaimed as true “submariner.”

“Brad Ziegler of the Arizona Diamondbacks is about the last pitcher with a submarine style of pitching,” said Song Jae-woo, a commentator at MBC Sports plus. “Extreme underhand pitchers are difficult to find in the majors these days.”

What makes Park’s pitch unique is not just the release point, but also its unconventional movement.

Although the horizontal movement of his fastballs is not as big as others in the league, it is the vertical movement that makes Park’s fastball particularly tough to make contact with. Average measurement of vertical movement of the balls tossed by conventional pitchers is about 41 centimeters. Overhand pitchers’ fastballs often generate hopping backspin, making it seem like the ball is rising from the ground. In comparison, submarine pitchers such as Park boasts extreme sinking motion when throwing fastballs, where the ball rises after it was released from the hand and falls rapidly before it travels through the strike zone. The vertical movement of Park’s fastballs is measured at about -25 centimeters.

“I think foreign batters are unaccustomed to how my fastball travels and that’s why it is difficult for them to make contact,” Park said. This seems to be true since Park’s fastball drops like a sinker just as it reaches the batter’s plate, a movement akin to the curveball of the left-handed pitchers. For the foreign players who are used to batting against right-handed overhand pitchers, Park’s fastball is something they rarely go against.

Park was disqualified from the final roster for the World Baseball Softball Confederation Premier 12. But there have been many cases where underhand pitchers such as Park made impressive marks in international competitions. Chong Tae-hyon, underhand pitcher of Lotte Giants who played for the national team during the 2000 Sydney Olympics, is an exemplary case. After going to the mound in two games against the United States to pitch for 13 and 1/3 innings while yielding only two runs, Chong became a regular for the national team.