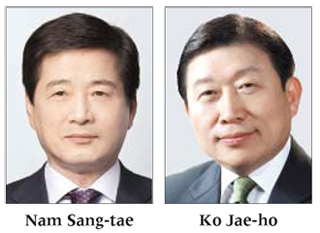 Almost a week after their raid on the offices of Daewoo Shipbuilding & Marine Engineering (DSME), prosecutors found evidence of accounting fraud in the company’s backbone business of building liquefied natural gas (LNG) tankers.

Suspicions of accounting fraud have been overshadowing the company for a while, but it has blamed its woes on the difficult business of building deep-sea plants, a relatively new sector that the company entered in 2008.

Irregularities in the LNG tanker business would be more serious since it is a signature business of the company. DSME became the No. 1 builder of LNG tankers in the world in 2001 and has built more LNG tankers than any other company in the world.

“Prosecutors will be investigating all the shipbuilding and deep-sea plant construction projects of DSME carried out from 2006, when former CEO Nam Sang-tae took office,” a prosecution official said. “All documents and data related to obtaining orders, construction and accounting for some 500 projects will be thoroughly examined.”

Their investigations have now narrowed down to LNG carrier construction projects, such as one for Canada’s Teekay Corporation in 2012 and Greece’s Maran Gas Maritime in 2014.

In the meanwhile, suspicious deals between company executives and Korean business partners, like the famous architect Lee Chang-ha, are allegedly surfacing in the prosecution probe.

In 2011, DSME tried to make Bow Hunter, a vessel it built in the company’s early days, into a museum describing the company’s history. The project was going to cost some 40 billion won ($33.9 million). The project fell apart in 2013 for lack of finances.

Prosecutors have also found evidence of a slush fund worth about 10 billion won raised by former DSME CEO Nam.

Marine transport company TPI Megaline signed a 10-year exclusive contract with DSME in 2007. The transport company is owned by Humex Shipping & Air Freight Corporation. An acquaintance of Nam is that company’s largest shareholder.

Prosecutors suspect Nam siphoned off money through the deal.

Meanwhile, the union of DSME decided to go on strike on Tuesday. The union held a strike vote from Monday morning to Tuesday afternoon with 6,985 members, and a majority voted for a strike.

“Today, 85 percent of the union voted for a strike to protest a unilateral restructuring process and demand a guarantee of employment for all employees of DSME,” the labor union said through a press release on Tuesday. “But the decision [to go on a strike] does not need to translate into immediate action.

“A complete disintegration of the company can be prevented,” it added, “if DSME and creditors agree to form a third-party consultative group.”

The company was unruffled at the vote for a strike.

“The fact that a majority reached agreement is not very significant,” a DSME official said. He added that a strike vote was conducted every year for the past 20 years, but the union never actually went on strike.

Last October, creditors agreed to provide 4.5 trillion won to the company on the condition that the union agree to a wage freeze and prohibition of strikes.

Creditors have so far provided 3.5 trillion won. If the union actually strikes, the remaining 1 trillion won is at risk.