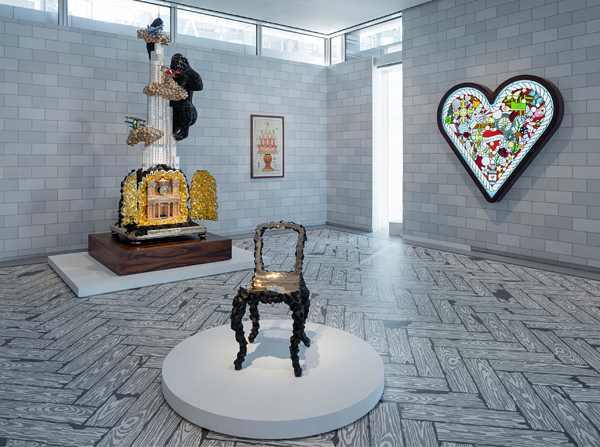 The installation view shows part of the exhibit “Studio Job Mad House” at the Museum of Arts and Design in New York. [AP/NEWSIS]

NEW YORK - Imagine a house containing a towering bronze pitchfork and shovel that will never be used for gardening; a working vacuum cleaner - topped with the gilded bust of a horse - that will never clean floors; and an oversize saucepan - made of crystal, bronze, wood and gilding - that will never find its way to the stove.

The art and design duo known as Studio Job specialize in creating works inspired by household goods but never intended for use.

Now, the Museum of Arts and Design in New York has transformed two floors into a “Studio Job Mad House,” featuring some of these eye-popping designs. The exhibit, which runs through Aug. 21, is set up as an imaginary house of an imaginary collector of Studio Job’s works. It exudes a sense of history, fantasy, irony and opulence.

The design team, founded in 1998, is composed of Belgian conceptual and 3-D designer Job Smeets and Dutch graphic designer Nynke Tynagel. Their works straddle art and design, and nod to medieval traditions of patronage by producing monumental works in high-end materials like bronze, crystal and gold.

“They tend to react to what is common and do the exact opposite, challenging the perception of what is normal,” says Ronald Labaco, a senior curator at the museum who organized the exhibit.

The works, many commissioned by patrons, rely on ancient crafts like bronze casting, gilding, marquetry, stained glass and faience, all with a contemporary perspective. The designs often draw from pop culture (like the movie “King Kong”) or historical events (like a bombing in London or the sinking of the Titanic).

The New York installation features 57 pieces, including sculpture, lighting, furniture, floor covering, wallpaper, drawings and other works produced over the past 16 years.

Adding to the sense of entering a realm of the unreal, the museum’s wood flooring has been covered in a vinyl covering that Tynagel designed to resemble a sort of cartoon of a wood floor. The walls are covered in her brick-themed, gray-and-white wallpaper, which vaguely resembles the inside of a medieval castle.

“We always think about placing our work inside a castle. We see it as a small society with every aspect of life within it,” Tynagel said in a 2010 interview, quoted in the wall text.

The pieces in the exhibit are organized along loose, sometimes contradictory ideas, such as love/lust, agrarian/preindustrial and church/religion.

“The idea is to create a kind of dialogue between the works,” Labaco says.

“Unlike most designers working today, we are not coming from modernism,” says Smeets. “Our contribution is that we’ve recovered a lost path. Is that design? Is it art? I’m not sure.. We’re situating decorative arts within the 21st century.”

Highlights include “Perished Bench” (2006), veneered of rosewood and maple in a delicate, complex pattern of real and imagined extinct animals. It opens in the style of a 15th-century Dutch triptych, but is made using the latest in computer-controlled laser technology. The theme - the transience of life - echoes themes common in 17th-century Dutch painting.

In another gallery, “Train Crash” (2015) depicts two cast-bronze locomotives colliding head-on, sending up clouds of smoke that merge to form a tabletop. The piece accompanied the design duo’s announcement that year that their long-term romantic relationship was ending, although their design collaboration continues.