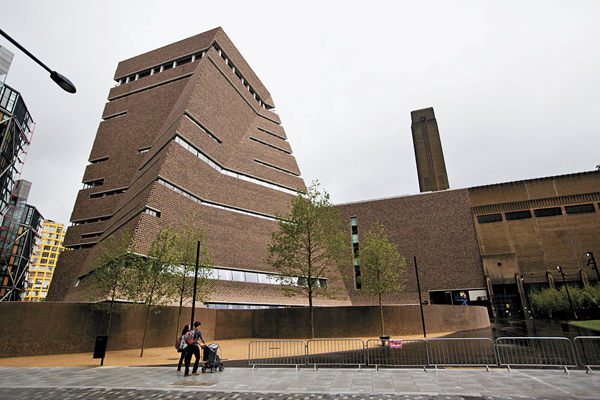 An exterior view shows a new building called the Switch House, at left, which has been added on to the Tate Modern gallery in London, on Tuesday. [AP/NEWSIS]

LONDON - It’s the disused power station that became an art-world powerhouse, and now London’s Tate Modern is even bigger, with a new 10-story wing to help absorb more than 5 million visitors a year - and more work by women and non-European artists on display.

The gallery beside the River Thames opened in 2000 and succeeded beyond its creators’ wildest dreams, becoming the world’s most visited modern art museum.

It’s a striking building, clad in a lattice of bricks whose texture has been likened to a nubbly old sweater. Inside, rugged concrete columns under soaring ceilings evoke the site’s industrial past. Parts of the old power station have been transformed - concrete tanks that once stored oil are now performance spaces.

Tate Director Nicholas Serota said Tuesday that the gallery now has 60 percent more space, allowing it “to show a much more diverse range of work than we have previously been able to do.”

More than a third of the post-1960 artwork on display is by female artists. Morris says the gender imbalance is bigger in the older work because “until recently, it wasn’t a level playing field.”