No pain, no gain

No pain, no gain 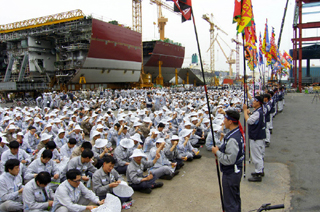 The labor union of Daewoo Shipbuilding and Marine Engineering (DSME) that had pledged to join the painful efforts to save the company vote for a strike.

The union claims that the restructuring plan that the management submitted to the creditors call for unilateral sacrifice of the union members. The union opposes a spinoff of specialized vessels part and a reduction of 2,000 workers from the 5.3 trillion won ($4.5 billion) self-rescue plan finalized on June 8. A union source said that the workers cannot do more after cutting the wages, eliminating bonuses and urging voluntary resignations.

Hyundai Heavy Industries union is to hold a conference of delegates at the Ulsan headquarters and decide on strike options on June 17. The members will vote on strike, and with majority support, the union can get into a labor dispute legally. At the collective bargaining for wages that began on May 10, the union demands an increase of 96,712 won in addition to the increase according to salary schedule, overseas training opportunities for more than 100 members, bonus payment, repeal of the performance-based salary system and union’s right to recommend external board member.

DSME’s operational deficit last year reached 5.5 trillion won, with its debt-to-capital ratio of 7,308 percent. More than 7 trillion won of public fund has been poured since 2000. When the company was struggling with debts, average salary for employees was 75 million won last year. The average service was 16.8 years.

Daewoo’s employees are paid more and worked longer than the employees of Samsung Heavy Industry, who are paid an average of 71 million won and have worked for 12.5 years. Hyundai Heavy Industries union members are highest paid in the industry with average salary of 78.3 million won, and when the company was struggling with nine consecutive quarters in deficit, the union demanded wage increase and overseas training opportunities. Compared to other manufacturing sectors, the workers at the three shipbuilding companies get considerable benefits. However, the unions of the three companies claim that the failure in management should not be transferred to the workers and started labor struggle since June 7.

Restructuring is a process of sharing pains. The management that led the company into insolvency, the government and creditors that failed the supervision duty, and the accounting firms that failed to detect insolvency certainly share the responsibility. However, the union, which had enjoyed high wage and expanded benefits during the heydays and demand the government to guarantee employment and wage level, should also share the responsibility. When the U.S. automobile industry was in jeopardy in 2011, the United Auto Workers Union gave up the hardline stance and pledged to help the company to make profits.

Now is no time for the unions to use the strategy of threatening the creditors with walkout. After promising to work together for normal operation of the company, the union wants to make sure no concession is made on its part. If so, they shouldn’t have imprudently said they want to join the “painful efforts.”