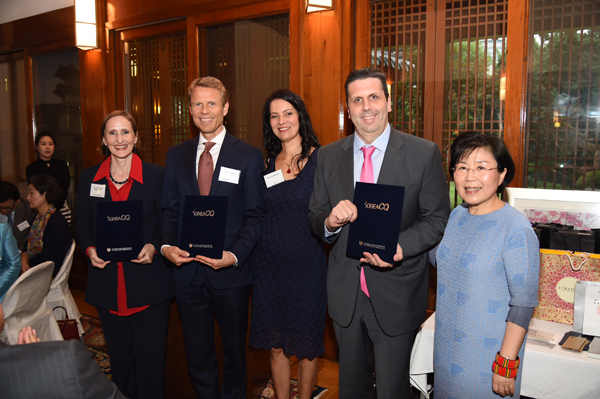 Choi Jung-wha, far right, president of the Corea Image Communication Institute (CICI), a nonprofit that promotes Korean culture overseas, and four other members from the 21st session of CICI’s Culture Quotient program pose on Tuesday at the U.S. ambassador’s house in Jung District, central Seoul, after receiving awards for their contributions. From far left: Austrian Ambassador Elisabeth Bertagnoli, recipient of the Cooperation Award; Uloff Munster and Patricia Munster, general managers of Merck Biopharma Korea, who were honored with the Grand Award; and U.S. Ambassador Mark Lippert, winner of the Eokkaedongmu Award. [CICI]