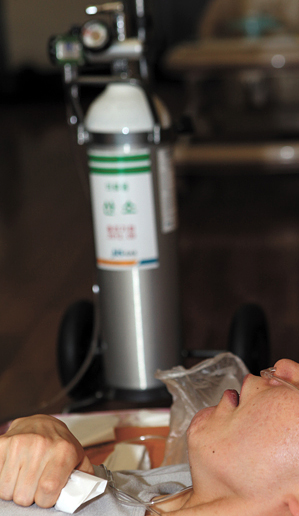 A 32-year-old woman relies on a respirator because she suffers from breathing difficulty after her lungs were damaged by humidifier sterilizers years ago. [THE VICTIM'S FAMILY]

It’s been nine years, but Lim Dong-sook keeps remembering her final moments with her 3-year-old daughter as she lay dying from pulmonary fibrosis in 2007.

“I think about it every day, every few hours,” says Lim. “I also think about how - every single day - I put that sterilizer in the water. For her sake.”

Lim’s daughter Jeon Sun-min suffered from dry cough from the age of 1. Lim used a humidifier at least 12 hours a day, hoping the humidity would help. She never failed to add sterilizer when she refilled the humidifier’s water, believing it would keep the water clean.

At the age of 3, doctors said Jeon had bronchiolitis.

Within a few months, her daughter couldn’t breathe except with a respirator.

“The doctors couldn’t tell me what was wrong with my Sun-min,” Lim says. “I even brought the humidifier into the hospital and kept it going next to her bed.”

In fact, Jeon Sun-min’s problem was the humidifier. The sterilizer used in it was slowly killing her.

“That I killed my own daughter makes it hard for me to sleep even today,” Lim says.

The victims were from all over Korea. They had no connections. Some were pregnant women, but many were not.

The Korea Centers for Disease Control and Prevention (CDC), the nation’s epidemiological sleuths, investigated. They determined that sterilizers used in home humidifiers were the cause of all the lung problems.

Pregnant women were more susceptible, they found, because they stayed home with their humidifiers on more than other people.

Health authorities officially confirmed the issue in November 2011. The authorities reported that there was a cause and effect relation between the disease and disinfectants stirred into the water used in humidifiers. Two ingredients - PHMG (polyhexamethylene guanidine) and PGH (oligo(2-(2-ethoxy) ethoxyethyl guanidine chloride) - were isolated as the main toxic agents.

The sterilizing liquids, which were sold by more than a dozen companies in Korea, weren’t needed in the humidifiers. Plain water worked fine. People used the sterilizers to keep the water inside the device from getting moldy, or out of a general fussiness. Many people brought humidifiers to hospitals when caring for sick relatives, like Lim.

In other words, people thought the sterilizers would make the steam safer for pregnant women, old people, sick people and even babies. They had no idea it was having the opposite effect.

The JoongAng Ilbo spoke to 109 people who got sick from the products on the phone and found that 39 of them, or 35 percent, increased their use of humidifier sterilizers after they started experiencing problems in breathing. They believed humidity in the air would help their lung conditions. They weren’t wrong about that, but the increased use of the humidifier usually meant an increased inhalation of the vaporized sterilizers.

Of the 39 victims, 24 reported that hospitals recommended they use the humidifiers to allay their lung conditions.

The doctors didn’t know their recommendations would lead to tragic results.

In 2008, Cho Jae-eun, now 61, was living with her 32-year-old daughter. Ever since her daughter gave birth to a son that year, Cho installed a humidifier in her room and diligently added the sterilizer, hoping to keep the mother and the baby healthy.

Her daughter developed a severe case of dry cough, and the doctors diagnosed an allergy in March 2010. The supposed allergy hospitalized her for a month, and she was dead in 40 days.

Another victim’s mother, Park Ji-sook, 36, said her doctor in 2008 recommended she use a humidifier for her 6-month-old daughter, who was suffering from pneumonia.

“He said it would help control the humidity in the air,” she says.

“She can’t run for long because her breathing is so shallow,” she says. “I should have known that if sterilizers can kill germs, they can kill people, too.

“I realized it too late,” she says.

This feeling of guilt was found in most parents.

“I think I killed her,” Cho says. “Her coughs sounded so serious, I fussed over her with the humidifier and sterilizer, and now she is dead because of that.

“It’s been six years, but I still cry so many times every day whenever I think of her,” she says. “People died for nothing, and no one seems to care.”

Humidifier sterilizers reportedly entered the market in Korea in 1994.

The CDC discovered the link between pulmonary fibrosis and sterilizers in 2011, and ordered a recall of humidifier sterilizers containing PHMG and PGH.

“These products advertised themselves as 99.9 percent safe,” Cho says. “Who would have thought that they contained toxic chemicals?”

In 2012, the Fair Trade Commission fined Oxy Reckitt Benckiser with 51 million won ($43,500) for false advertising. That same year, Homeplus and Butterfly Effect were each fined 10 million won for the same reason.

But health experts remain wary about other products on the market.

“There are some 43,000 chemical products being used in Korea currently,” says Kim Sung-kyoon, a professor at Seoul National University Graduate School of Public Health. “The Ministry of Environment tested toxicity for only 6,600 of them.”

The Act on the Registration and Evaluation, etc. of Chemical Substances does not stipulate chemical products must reveal their ingredients unless they contain 870 toxic chemicals or 120 carcinogens.

Until 2011, the Ministry of Trade, Industry and Energy had named the sterilizers a voluntary-safety-management product, meaning their safety was regulated by the market rather than the government.

It also didn’t help that the management of chemicals and biocides was - and remains - divided between different parts of the government.

As of 2015, health authorities confirmed through two rounds of epidemiological studies on 530 people that 221 are victims of humidifier sterilizers. An additional 752 people applied to be tested by the government in its third round of surveying, and another 1,057 have registered for its fourth round. That brings the total number of people who claim to be victims of humidifier sterilizers to 2,339.

A public and private committee conducting an epidemiological survey on patients of pulmonary illnesses expect there to be as many as eight million victims of varying magnitude.

“The thousands who registered as victims could just be the tip of the iceberg,” says Paek Do-myung, a Seoul National University professor who headed the committee in 2013.