Saenuri votes to accept back reps who walked out

Saenuri votes to accept back reps who walked out 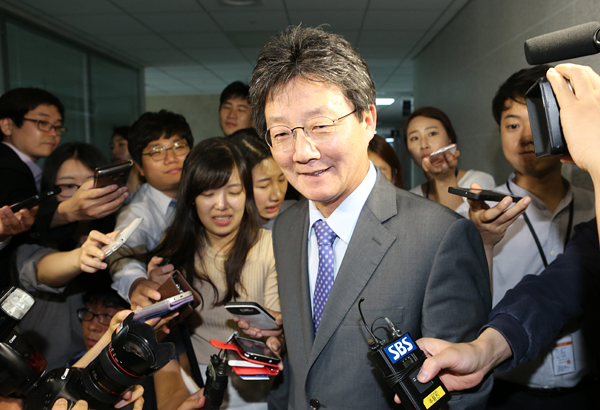 Rep. Yoo Seong-min speaks to reporters in front of his office at the National Assembly on Thursday after the Saenuri leadership made a decision to allow the return of lawmakers who defected before the April 13 general election. [CHO MUN-GYU]

The Saenuri Party welcomed back lawmakers who abandoned it to run independently in April’s general election, including Rep. Yoo Seong-min, a high-profile political enemy of President Park Geun-hye.

The interim leadership of the Saenuri Party, headed by an acting chairman, Kim Hee-ok, held a meeting Thursday morning to discuss the issue of reinstating seven lawmakers who left the party after being denied nominations to run in April.

They won their races as independents. When no agreement was reached on their fates after three hours of debate, a secret ballot vote took place, and the leadership decided to invite them back.

“The opinions were split, but we decided to bring all of them back based on the vote,” said Rep. Kim Young-woo, a member of the 11-member interim leadership. “We don’t know how many supported it and how many opposed it.”

With the return of the lawmakers, the Saenuri Party regained its status as the largest power in the National Assembly, although it does not command a majority.

The decision to bring back the defectors including Yoo prompted an immediate protest by Park loyalists in the ruling party.

Describing the move as a “coup,” they complained that the presidential office was kept in the dark about the interim leadership’s plans.

The party, which controlled a majority in the National Assembly for the past four years, suffered a crushing defeat in the April 13 general election.

The conservative ruling party only won 122 seats in the 300-member legislature and is now outnumbered by the liberal opposition.

Eleven independents won victories, and seven of them were Saenuri members who quit the party after they were denied tickets in the race.

Many of them were considered less-than-loyal to President Park, and the integrity of the selection process, controlled by Park loyalists, was questioned throughout the campaign.

Reps. Kang, Ahn, Yoo and Yoon already filed applications for reinstatement, which were immediately approved. “If the other three file applications, we will do the same,” said Rep. Ji Sang-wuk, spokesman of the emergency leadership.

Rep. Joo said he would file an application as soon as possible.

If all seven return, the Saenuri Party will hold 129 seats in the National Assembly. The Minjoo Party, which won 123 seats, technically only has 122 seats, since Rep. Chung Sye-kyun relinquished his party membership after becoming National Assembly speaker as required by law.

Ji said the interim leadership saw the return of the seven independents as the starting point for reinventing the party.

Among the four lawmakers who returned to the Saenuri Party on Thursday was Rep. Yoo, who gained considerable public admiration after going into a political battle with the president. He is now considered a possible presidential candidate.

Once an ally of Park, the two parted bitterly last year after she publicly condemned Yoo for “politics of betrayal” over a deal he brokered with the opposition. Yoo was forced to resign from the floor leader post and became an icon of resistance to the president.

After Yoo asked to run in Daegu’s Dong B District for a fourth term, Park loyalists denied him a Saenuri nomination. They claimed Yoo has a different ideology and philosophy from the ruling party. Yoo left the Saenuri Party on the eve of the general election, ran independently and won, greatly helped by the shabby treatment given to him by Park’s allies.

The representative issued a press release on Thursday thanking the interim leadership for its decision.

“I will dedicate my all to accomplishing a reform of the conservatives and reconciliation within the party,” he said. “I will return to my longtime home and work hard to restore the public’s support for the party and to make sure the party gives hope to the people.”

Another controversial lawmaker to return was Rep. Yoon Sang-hyun, a Park ally who was denied a nomination for having made public the factional strife within the ruling party on the eve of the election.

Yoon, a former political adviser to President Park, was denied a nomination after an audio clip of a telephone conversation was leaked to the press.

In the recording, Yoon can be heard telling an unidentified person that Kim Moo-sung, then the Saenuri Party’s chairman, should be “weeded out” and “crushed.” Yoon ran as an independent and won.

While adversaries of Park have demanded that all the independent lawmakers be allowed to return before a leadership election in August, Park allies have said only five of them - excluding Yoo and Yoon - should be brought back.

Thursday’s decision by the interim leadership based on a secret ballot vote indicated that the Park allies’ demand was no longer accepted in the party.

The ruling party’s decision was a major challenge to President Park. Even after the ruling party’s humiliating defeat in the April election and Yoo’s victory as an independent, Park was adamant that the party must not allow his return.

During a luncheon with senior media editors on April 26 at the Blue House, Park issued a lengthy defense for her criticism of Yoo and said reinstating him should be decided once the Saenuri Party was stabilized under a new leadership.

“An important matter of the party must be discussed officially at a lawmakers’ general assembly,” Rep. Kim Tae-heum said. “Some members on the interim leadership secretly planned it and pushed forward the reinstatement as if they were staging a coup.”

Rep. Hong Moon-jong said the Blue House had not known about the interim leadership’s decision. “There is no way to reverse it,” he said. “The interim leadership was given a blade to operate and remove the infected area, but it stabbed the wrong place.”

A member of the interim leadership told the JoongAng Ilbo on the condition of anonymity that the Blue House was only informed after the vote took place.

Rep. Chung Jin-suk, the new floor leader of the Saenuri Party, said he has faith in President Park to demonstrate the “politics of engagement.”

In an interview with YTN on Thursday, Chung said he had not known that the leadership would decide on the defectors’ fate so quickly.

Yoo’s return is expected to influence the Saenuri Party’s leadership election, scheduled for Aug. 9, as he is likely to empower Park’s adversaries.

Speculation grew Thursday that Yoo may run to become the party’s chairman.

As concerns grew that the party would once again fall into factional strife, Chung said Yoo should not run in the leadership election.

“The returning lawmakers must put all their efforts into the party’s unity and reconciliation,” he said.

Asked if Yoo must avoid running in the leadership election, Chung said, “That’s the implication, since they left the party and came back.”

Meanwhile, a meeting of senior Blue House officials, the administration and the party was abruptly canceled Thursday afternoon. The meeting was supposed to discuss the site of a new airport in the southeastern region as well as industrial restructuring and day care programs.

It was not immediately announced why the conference was canceled.