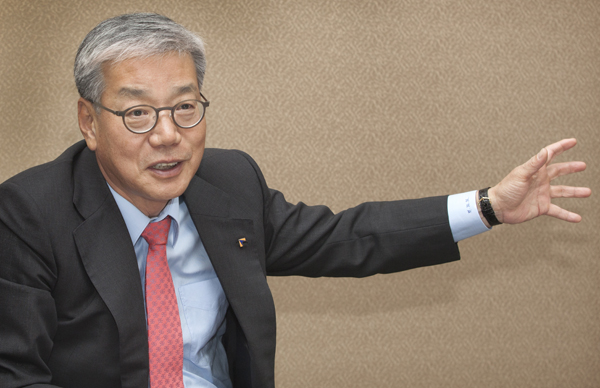 Back when Hwang Young-key, chairman of the Korea Financial Investment Association (Kofia), headed Woori Financial Group in 2004, he was nicknamed “Gladiator Hwang.”

As chairman of the government-backed financial institution, Hwang was charged with fending off the government’s strict control over the financial sector. He fought for what he thought was right and dreaded no one but the shareholders.

It has been about 10 years since “Gladiator Hwang” put down the sword and took up a pen.

“I am more like a philosopher these days,” Hwang said in an exclusive interview with the Korea JoongAng Daily on June 8. “Probably a reformist philosopher.”

The 63-year-old financial veteran stressed that local financial companies need to expand their reach beyond the country, and that this is key to the survival of Korea’s financial industry.

Hwang’s career began at Samsung Group, Korea’s top conglomerate. But due to the need for more expertise, Hwang left the company and studied financial management at the London School of Economics. He later worked in the Seoul and Tokyo branches of Bankers Trust to accumulate experience in international finance.

Since his return to Samsung in 1989, Hwang has gained extensive experience and deep knowledge in finance, working as the head of both the international finance team and personnel department at Samsung Group, corporate treasurer at Samsung Electronics, president and CEO of Samsung Investment Trust Management and president and CEO of Samsung Securities.

To support the internationalization of the local market, Hwang says Korea needs a whole new playing field that is open to the world and with little regulation.

“Kudos to the financial regulator for the ongoing reform efforts,” Hwang said. “Still, not enough. If likened to an old apartment, the Korean financial industry is in need of reconstruction with a new framework, not just remodeling.”

While addressing immediate challenges, the financial regulator needs to evaluate the fundamental problems of the system and map out a mid- and long-term plan that will lead the industry to where it needs to be in 30 years, he emphasized.

Q. Where should the Korean financial industry be heading?

A. There is no way other than internationalization. We should open our market. Historically, countries that opened their markets to the world thrived, while those that remained closed failed. Amy L. Chua observes the fate of [the United States] in “Day of Empire,” and concludes that intolerance has led empires to failure. The main idea of the observation is that rules and regulations based on openness and tolerance are important.

When empires opened their doors and embraced nearby forces, they thrived. But when they shut their doors, the empires collapsed. Same for Genghis Khan and ourselves. Fortunately, the companies built factories at the time with ambitions for the global market. Most of the industrial growth we have achieved now is thanks to the mindset of going global.

Until 30 to 40 years ago, we never thought “Let’s just go easy in the local market.” All those businessmen - including founder Lee Byung-chull and Hyundai founder Chung Ju-yung - as well as politicians and government officials had the consensus that we needed to go abroad. Their ambition turned into reality starting in the 1970s, and was the fundamental driver for our growth today.

But since around the ’80s, we started losing that openness and progressive spirit. It got more serious in the mid-’90s.

Recently, there are a few successful businesses creating a large number of jobs.

When Samsung Electronics was a tiny manufacturer, its fate was up to then-Hanil Bank. Banks were much larger and stronger at the time than the companies that turned into huge conglomerates today. The heyday of the Korean financial industry is over.

Korean financial firms have never successfully expanded overseas. Why is that?

For many reasons, most of the problem stems from a long-held perception of finance as infrastructure and complacency running deeply across the local industry. In the past, the Finance Ministry didn’t deem finance as an industry but as part of the social infrastructure. There was tacit consensus that banks should lend money at low costs for businesses. The government thought finance should support industries, and that the success of industries would help strengthen the country. Another problem is that there is no one like Lee Byung-chull and Chung Ju-yung in today’s financial industry. This industry is now heavily controlled and regulated by the authorities, and society expects them to keep the industry fiscally sound and the market stable. Under this control, insiders of the financial industry are busy complying with all the regulations and meeting social expectations in terms of soundness. Meanwhile, they have grown too complacent about further growth. As a finance professional, I also need to self-reflect on this.

Do you think Korea can have a financial equivalent to Samsung Electronics?

I think there are slim chances for banks, but hope can be pinned on some asset management firms. Compared to the securities sector, the asset management sector is quite sizable. Samsung Asset Management runs nearly 200 trillion won ($170.4 billion). As the government moves to loosen regulations on hedge funds and private equity funds, there are expectations that the overall size of the country’s asset management can grow, including the National Pension Service fund, retirement funds and insurance funds. If these funds continue expanding, Korea can have a 1,000-trillion-won asset management firm in the future. Then, we could compete with global players like BlackRock, which currently runs $4 trillion.

Even if we have such a huge firm, there are no attractive investment options at home. So, they also need to invest abroad. There are many ups and downs in the securities market. In the asset management market, market capitalization can have an increase or decrease but the total size of funds keeps growing beyond market expectations.

What kind of efforts should Korea’s financial companies make to go global?

We should bring in top-tier financial professionals. It could be the chief investment officer at GIC or the cash equity head from BlackRock. Kia Motors sets a good example because they used the expertise of renowned designers like Peter Schreyer when making the K9. Samsung Electronics has also invited designers of different nationalities to design its smartphones.

In a sign of positive moves, local financial companies are making efforts to boost their footing on the global stage. Mirae Asset Global Investments has launched the so-called out-to-out scheme that manages the funds earned through foreign bonds overseas. Mirae is the leading player in this respect. Samsung Asset Management is also signaling a positive step forward after CEO Koo Sung-hoon took over the company. So, in 10 to 15 years, I believe we will be able to see a global financial player in Korea.

Why do multinational banking and investment companies pull out of Korea?

To put it simply, Korea has too many unnecessary regulations that translate into increases in risks and costs. Meanwhile, profit levels are not that high.

The government is moving to deregulate different rules and turn Korea Exchange into a holding firm. But from the perspective of global financial companies, the measures are not sufficient to make Korea an attractive market.

The country’s regulations are preoccupied with concerns regarding the protection of investors, whereas other advanced countries emphasize the responsibility and autonomy of investors. The measures intended to protect investors often turn out to stifle financial companies. As it also increases regulatory risks, financial companies figure it would be more expensive to operate in Korea because of the spending related to compliance settlements.

Another reason is that domestic companies created an environment that generates low profitability amid fierce competition. In the process of attracting more clients, they often sacrifice profitability, churning out similar products at lower prices. Local banks’ return on assets (ROA) are recorded at 0.3-0.4 percent and the average return rate is 4 percent, which is really low compared to other markets. Overall, foreign companies don’t have much incentive to break into Korea.

The Park Geun-hye administration has embarked on reform actions in the financial circle. How do you assess the government’s moves so far?

The ongoing financial reform is one of the most sweeping and comprehensive, containing a sincere willingness to fix the markets. But this is not enough. We need to overhaul the system, which means we should reconstruct the system in addition to repairing the broken parts.

Above all else, we need to change from a rule-oriented system into a system based on broader principals. With the current regulations, the authorities state every detail that financial companies should follow. Anything absent from the articles is considered violating the rule. Let’s take the leverage ratio rule. Korea specifies the specific maximum ratio at 1,100 percent. But a principal-focused system would stipulate that financial companies should retain soundness. Enforcement ordinances and model rules could follow the principle. When the regulation is strictly defined, it could lower financial companies’ ability to adjust to the fast-changing conditions of markets and restrain creativity.

Let’s say that I live in a worn-out apartment where all the furniture and even the gas pipes are broken. My position is re-designing the entire house both inside and outside. But it seems that the stance of FSC’s Yim Jong-yong is to fix the broken parts.

The Individual Savings Account (ISA), an integrated financial platform that manages securities, savings and fund products, is one of the major measures by the current administration. Three months into the introduction, what do you make of the new platform?

The number of subscribers has exceeded 2 million. I believe that surpassing 5 million within this year would not be a long shot. But some 80 percent of them are subscribed to products that guarantee principal and provide only modest returns. The ideal way to use a tax-exempt platform like an ISA is having high-yield products. In countries like Japan and the United Kingdom, a great deal of accounts are subscribed to high-yield, securities-linked products.

Is there any country Korea can emulate to realize the vision you draw?

Singapore has taken an ideal path for Korea. Singapore is small in size but it serves as an international finance hub. Singapore was able to do it, but we couldn’t. Threats from North Korea aren’t to blame ? it’s the attitude and mindset of policy decision makers. Singapore has a cohesive political system enabling the government to pull resources to build the infrastructure and rules it needed to become a financial hub.

But Korea’s political system doesn’t seem sustainable. We have a law aimed at transforming Korea into a financial center, but there has not been much progress so far. One factor that drags down the vision is the protective laws in finance, law and accounting, which hampers the active performance of multinational companies. Those rules all resulted in restraining creativity and potential.