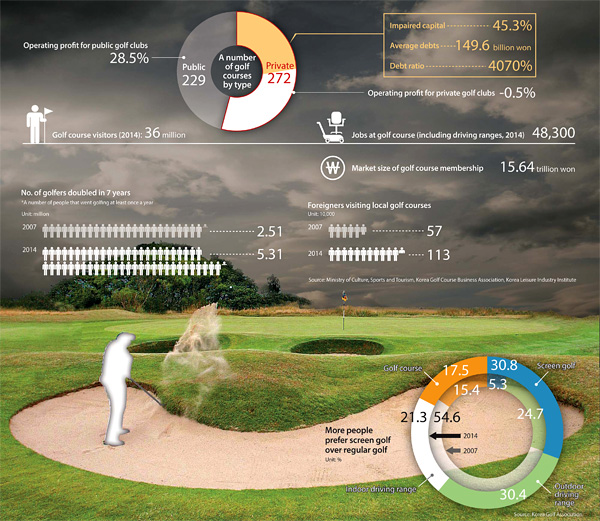 The club suffered massive losses after the 2008 financial crisis, and though it found a new owner in 2013, it couldn’t stay open because of conflicts between shareholders. Around 80 caddies lost their jobs and only a few employees stayed on to manage the facility.

After opening in 1989, the club has become a story of the past.

Some 49 percent of golf clubs in Korea are facing deficits, and many have even filed for bankruptcy. This is because the number of golf clubs in Korea has doubled over the past 10 years, outstripping even the substantial growth in golfers here. Golf clubs are not able to attract as many customers as they did before because so many are competing for the business, offering substantial promotions and discounts that cripple operating profits.

Private golf clubs are struggling more than public clubs. “Our yearly losses are some 3 billion [$2.6 million] to 4 billion won and we are not even sure whether we can pay our taxes,” said the owner of a private golf course in North Chungcheong.

Many private clubs have considered turning public to lower their taxes, but if they did, they would have to return the membership fees they have already received, putting them deeper into debt.

Some say the golf clubs are at fault for the crisis. During the mid-2000s, owning part of a club looked like a great investment. Would-be developers pooled their money to raise the 100 billion won it took to build a course, and golfers quickly shelled out astronomical amounts for a membership - between 100 million won and 2 billion won ? because they thought it would only increase in value should they decide to sell later on.

During the same period, local governments eager to boost tax revenue granted rights to build courses left, right and center . At a time when most countries like the United States were seeing their golf clubs merge to reduce competition, Korea was one of the few to have new clubs sprouting up by the day.

Golf is a sport, but it’s also an industry that is responsible for many jobs. “Regardless of what one thinks of golf, one needs to understand that it has the biggest market size in sports,” said Kim Do-kyun, a professor at Kyung Hee University.

Many golf clothing and accessory manufacturers are small or mid-sized companies. The manufacturing industry is being affected by the ongoing restructuring of the shipping and shipbuilding industries, and many workers aren’t hopeful they can find a new job if they lose their current one.

Even though some say the government needs to step in to solve the problems in the golf industry, it has done little because many Koreans still think of the sport as a luxury.

As it stands, the Ministry of Culture, Sports and Tourism recently said it would allow private golf clubs to turn public if 80 percent of their members agree with the idea. Prior to that, most believed the government required all members to agree on the change. The government also promised it will provide low-interest loans for golf clubs so that they can return membership fees, a requirement for going public.

But on closer examination, it seems the ministry has little grasp of its role in regulating the golf industry, as there was no actual governmental regulation relating to courses going public to amend in the first place.

Moreover, 1 percent interest loans will do little to help golf courses if they have to give back some 100 million won in membership fees to each of their members.

But an even bigger storm is approaching: The anticorruption bill, also called the Kim Young-ran law, will go into effect in September. The law limits the amount of money companies or corporations can use to keep business partners happy, which often involved lavish spending at golf clubs. Industry insiders worry this could be the coup de grace for the industry.

In order for the golf industry to survive, it needs to rebrand as a leisure sport rather than a playground for rich people.

“Golf courses won’t be able to survive unless they change to public courses or reduce membership fees,” said Seo Chun-bum, a director at the Korea Leisure Industry Institute. “The government also needs to plan out measures to make the golf industry a high-value-added service industry.”

Even though some say the golf industry is going down, there are actually more people playing golf than ever. In fact, 5.31 million people played golf at least once in 2014, more than double the 2.51 million in 2007.

But many of those are quickly heading to overseas courses, or to play at virtual-reality screen golf zones.

A 40-year-old man who works at an insurance company goes to foreign countries two or three times a year to golf. He recently went to the Philippines for a four-day weekend to play. He says he opts to head overseas because of the high fees in Korea and to avoid awkward moments like running into his bosses from work.

According to the Korea Golf Association, the number of Korean golfers who went to courses overseas rose from 570,000 to 1.13 million in 2014, which is an increase of 200 percent.

Among those who played golf at least once in 2014, only 17.5 percent played on an actual course. This rose by 2.1 percentage points from seven years ago.

On the other hand, 30.8 percent of people said they played screen golf last year, a whopping 600 percent increase from the 5.3 percent reported in 2007. This was boosted by previous political administrations ordering their employees not to spend money on luxuries like golf, which pushed golfers off of courses and into basement screen golf zones.

Some of the people most affected by the industry’s troubles have been golf caddies. Many golf clubs facing financial troubles first cut the number of caddies, and some have stopped the service entirely.

“There are more golf courses that do not have caddies anymore and some choose to reduce the work load for caddies by only making them drive carts and help golfers measuring distance,” said Song Kwon-yong, CEO of Century 21 Country Club.

As demand for caddies drops, so do wages and subsequently, demand for the jobs.

Many of the outdoor stores located at golf clubs are also shutting their doors.

“Many golf courses are closing down their stores since they can’t pay their employees,” said Oh Cheol-kyu, a director at the Korea Golf Association. “Golf courses located in rural areas are among the few places that help the local economy, and these kinds of losses affect the economy in general.”

Small and midsize companies that manufacture golf clubs and accessories are also complaining about the situation. Industry insiders said they will be hit even harder once the Kim Young-ran Law takes effect on Sept. 28.

“There will be a smaller number of corporations paying golf fees through their corporate cards,” Oh said.