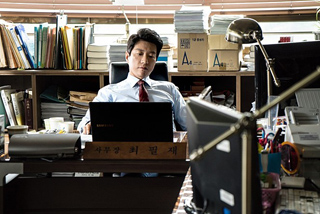 Korean film “Proof of Innocence,” starring Kim Myeong-min (pictured), debuted in second over the weekend. It centers on a group of people embroiled in a chaebol-related scandal. [NEW]

Walt Disney Studios’ “The Jungle Book” was still strong in the second week of its release.

The live-action film based on the novel of the same title by Rudyard Kipling remained at the top of the box office with 619,178 tickets sold over the weekend and an accumulated 1.7 million in total, roughly translating to 5.4 billion won ($4.6 million) in sales.

“The Jungle Book” accounted for 27.4 percent of the weekend’s box office sales, according to the state-run Korean Film Council on Monday. The family film was screened across 898 theaters. 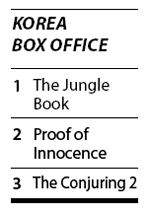 In the film, actor Kim Myeong-min plays Pil-jae, a competent middleman who finds legal cases and passes them to lawyers. But Pil-jae and his main customer, lawyer Pan-soo (played by Sung Dong-il), receives a letter from a prisoner who pleads his innocence.

The prisoner says he was falsely accused of murdering the daughter-in-law of a chaebol family. Even though the film has the all-too-common themes of corrupt chaebol and people struggling to reveal the truth, it saw 429,488 tickets sold in its first week of release.

The lead actor Kim is often dubbed an “acting guru” by many film and drama fans.

Hollywood horror film “The Conjuring 2” has gone up to third this week, pushing Korean film “The Handmaiden” by director Park Chan-wook to fourth.

Although “The Handmaiden” has stepped down, the thriller sold 3.7 million tickets by its third week despite controversial themes. It also broke the box-office record held by “Sympathy for Lady Vengeance” (2005), which used to be Park’s second-most watched film in theaters after “Joint Security Area” (2000).

“Sympathy for Lady Vengeance” is R-rated (19 and over) just like “The Handmaiden” and sold 3.6 million tickets.

Hollywood action blockbusters such as “Warcraft: The Beginning,” “Teenage Mutant Ninja Turtles: Out of the Shadows” and “X-Men: Apocalypse” remained in the top 10, while Korean horror flick “The Wailing” also remained on the list for its sixth week. The film is likely to reach seven million tickets sold soon.