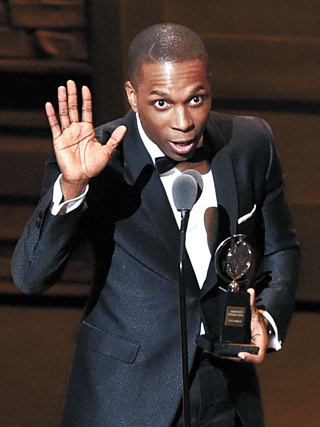 Leslie Odom Jr. accepts the award for leading actor in a musical for “Hamilton,” at the Tony Awards at the Beacon Theatre, in New York. [AP/NEWSIS]

NEW YORK - A week after winning a best leading actor Tony Award, Leslie Odom Jr. has announced he will leave the hit Broadway musical “Hamilton,” joining key principals out the door next month.

The actor, who plays Aaron Burr in the hip-hop hit musical about Alexander Hamilton, announced Sunday on Facebook that he’ll leave the show on July 9 when his contract is up. He has been with the show since it first began performances in early 2015 downtown.

Odom said on Facebook that he would never forget the people he met during the process, which he described as “healing” and “inspiring.” In an interview with The Associated Press on Friday, the actor said that he wanted to focus on his music after he leaves the show. This month, he released a self-titled jazz album, his first in a new four-CD deal with S-Curve Records.

Odom’s announcement follows that of show creator and star Lin-Manuel Miranda, who said Thursday that he also would exit the show on July 9. Phillipa Soo who plays Eliza Schuyler also announced this week that she’ll exit the show in July. So far, there is no word on two other principals - Tony-winners Daveed Diggs and Renee Elise Goldsberry.

Many who celebrated the 11 Tony-haul of “Hamilton” have been with the show for a long time, most for a punishing eight-show-a-week schedule.

Odom, who studied at Carnegie Mellon University, became the youngest ever cast in the Broadway company of “Rent.” He also was on TV in the series “Smash” and “CSI: Miami,” in the film “Red Tails” and on Broadway in “Leap of Faith.”

On Friday, Odom told The AP that he was looking forward to other people tackling Burr, which was written specifically for minority actors. “It’s a great part that now exists for actors of color,” he said. “I have friends that I want to see sink their teeth in this part.” AP