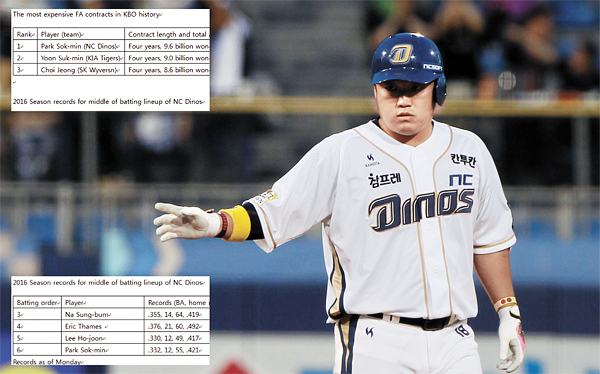 The NC Dinos has dived into their fourth season with high hopes, as demonstrated in the sheer volume of investment they made over the winter transfer window last year. Now, after accomplishing a historic feat by setting a franchise record with the number of consecutive wins, no one can doubt that the team’s investment has paid off, including its 9.6 billion won ($8.4 million) paycheck to snatch free agent Park Sok-min from the Samsung Lions.

From June 1 up through Sunday, the Dinos have not conceded a loss in the Korea Baseball Organization (KBO) and topped the franchise record in winning streaks. Its pitchers have been solid throughout the season so far, ranking second in the category after defending champion Doosan Bears with a 4.01 earned run average. Their contribution to the team’s success this season cannot be overlooked, of course.

But, pitchers’ efforts alone are by no means sufficient enough for a team to excel, unless they’re bolstered by the batting lineup. And the Dinos batters have done their job properly.

The Dinos’ batting lineup hasn’t always been this stable in the past.

In 2014, the year in which the Dinos advanced to the quarterfinals of the postseason, the team was ranked near the bottom at eighth in batting. Were it not for the pitchers that remained strong throughout the season, the Dinos would not have been able to make it past the regular season.

Its batting lineup began to turn things around last season, during which the team was ranked fourth in BA. The credit mostly goes to the middle of the batting lineup consisting of the trio Na Sung-bum, Lee Ho-joon and Eric Thames.

Na, in his third year in the pro league, collected .326 BA, 28 home runs and 23 stolen bases in 2015. The veteran Lee displayed his power with the bat by driving 24 home runs while putting up 110 RBIs. Thames, the outfielder from Santa Clara, California, become the first player in the KBO to join the 40-40 club, with more than 40 bases stolen while cranking more than 40 home runs in a single season. Thames went on to become KBO’s MVP. The trio combined 99 home runs, only 15 dingers short of the number of homers that LG Twins accumulated as a team that year.

Boosted by the batting prowess of the trio, the team went all the way to the semifinals, but its run was cut short by the Bears.

After losing, the Dinos decided to bolster the batting lineup further. To get there, the Dinos team was willing to spend more money than any other club, especially to turn the trio into a quartet. When the third baseman Park Sok-min became a free agent (FA) in November, the Dinos poured in nearly 10 billion won for a single player. Former Lions franchise star, Park became the most expensive FA in the history of KBO. And, it took the Dinos only two days to finalize the contract once Park was listed on the FA market.

Park’s four-year contract worth 9.6 billion won includes a 5.6 billion won of signing fee, 3 billion won of annual salary and 1 billion won of incentives. Although the Dinos have spent up to 5 billion won to bring in batters since it joined the KBO in 2014, this was the first time that the Dinos spent money on a free agent during the winter transfer window. The money they saved during the past three seasons was spent to add Park to their roster.

“We have made the hard decision [to spend such large sum of money for one player] so that the Dinos can be a stronger team and make the citizens of Changwon city proud,” said Bae Seok-hyeon, the general manager of the Dinos. The Dinos’ gross profit that year was 40.9 billion won, making the paycheck to Park about 25% of the total sales. The team was embroiled in controversy, some fans go as far as criticizing that the Dinos have overpaid.

But little did they know that Park was going to be the goose that laid the golden egg. With the quartet assigned from the third spot to the sixth in the batting order, opposing pitchers are without a recess in between. During the 15-win run, Park accumulated a .500 BA, six home runs, including a grand slam, and 25 RBIs. His slugging ability, reinforced by his intelligent batting skills, renders pitchers less than useless against him.

Park’s contribution to team’s success, however, is so much more than just inside the field. Turning 31 today, Park is deemed a leader for the young team. “I hope the players think of themselves as the best players in the league when out in the field. I hope they stay that confident,” Park said before the season started.

“I think being in a team with a good batting lineup creates synergistic effect and allows me to hit well as well,” Park said earlier in the season. Park was right after all, as manifested by the team’s recent performance.